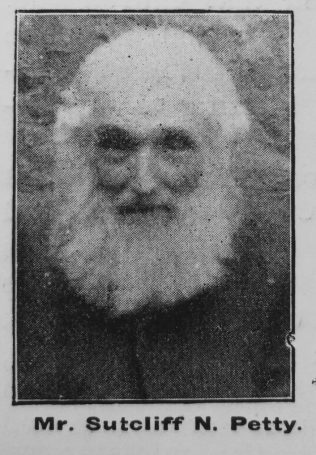 Transcription of Obituary in the Primitive Methodist Magazine by J Swales

The late Mr. S. N. Petty was born on December 20th, 1820, at Salterforth, near Colne. He was one of the pioneers of Primitive Methodism in that part of the country. He was a nephew of the Rev. John Petty, of honoured and precious memory. Many of the fine qualities of the uncle, with perhaps a little less emphasis, were illustrated in the life of the nephew. The Petty family of that generation was certainly a remarkable one, and may rightly be called a preaching family. There were six brothers and sisters, all of whom were local preachers, and one brother (John) and one sister (Hannah) eventually becoming travelling preachers in our church. Another interesting coincidence is seen in the fact that Joseph, Mark, John, Hannah, and Mary Petty, all preached their first sermons in our little chapel at Barley, a village nestling under the shadow of Pendle Hill. It was also in this same sanctuary, now in the Barrowford circuit, that the subject of this sketch commenced his career as a local preacher, more than half a century ago. His father, Richard Petty, was a member of the Baptist Church, at Salterforth, and a local preacher. His mother was a devoted Christian Woman, who looked well to the ways of her household, and, along with her husband, gave their children a careful Christian training. In his 20th year, largely owing to the fine religious spirit which pervaded that quiet home, the youth gave himself to God and joined the Baptist Church in his native village. A few years later he removed to Colne, and was brought into fellowship and service with a number of hearty and earnest Primitive Methodists, including the late John Hartley. These two, Messrs. J. Hartley and S.N. Petty, rendered splendid service to our Church in its early struggles, and by their loyalty and unstinted service, helped to lay the foundations of what is now one of the most prosperous churches in Primitive Methodism. It was in those days that the early services of our General Missionary Treasurer were stimulated and cultured; and if for nothing else, we will ever be thankful to the noble spirits in that church who, by the blessing of Almighty God, helped to give us, in Mr. W. P. Hartley, a life so fruitful of good and rich in blessing to our beloved Zion.

Brother Petty served our Church in almost every department of Christian work and enterprise. As a local preacher, he was earnest, thoughtful, and often quaint in his utterances. When health permitted, he took a large share of work on the preachers’ plan, and his visits to the several places, which now form five circuits, were always looked forward to with interest. He was a man of critical habits of thought. He subjected himself to a strict mental discipline. In a friendly way, he was critical as to the efforts of others. I have heard a number of the old local preachers say they stood in considerable awe of him. His fine appearance, with keen eye, and mind alert, ever attentive to what was said, made those who were less cultured, or who had not sufficiently prepared themselves for their work, feel their position keenly. But there was no need to fear our brother, he had a kind heart. His critical powers were exercised in a truly Christian spirit. He had a deep interest in truth. He held that the great work of preaching, demanded the best a man can give. He was an ardent worker in the Sunday school. For many years he was society and circuit steward. He was also a very successful class leader. He took a deep interest in circuit and connexional affairs, and more than once had the honour to represent his circuit in the Annual District Meeting.

Our brother was called to other than active service. For nearly 30 years, his was a ministry of suffering. It cannot be said which ministry was the most successful. For years he was only able to attend the services of God’s house during the summer months. How he appreciated those opportunities. On those occasions his venerable presence was an inspiration to the minister. For twelve years he was almost a confirmed invalid, through an attack of apoplexy. His long and trying illness was borne with exemplary patience, and a manifest resignation to the Divine will. Being a thoughtful reader of the scriptures from his childhood, his mind was stored with sweet and precious promises, which gave him comfort and confidence, and which he often quoted with aptness and emphasis to those who visited him. The writer, whose duty it was as his pastor for five years to visit him, was often conscious of having received more good by his visits than he was able to communicate. His faith in God was strong; his love to his Saviour was ever increasing, and his religious experience became richer and deeper day by day. Those who were about him inform us that his mind remained wonderfully clear and strong on religious matters right to the end. A few days before the end came he failed to recognise those who were about him, and when asked “Do you know us?” would answer “I don’t think I do,” but when asked “Do you know Jesus?” he would answer at once “ Yes, I think I do know Jesus.” Thus quietly, peacefully, and trustfully passed away on October 24th,1901, a life ripe in years and rich in service, whose memory will be fragrant for many years to come.

Sutcliffe was baptised on 21 December 1820 at Bridge Chapel, Barnoldswick, Yorkshire. His parents were Richard Petty, a tailor, and Martha King. Sutcliffe also worked as a tailor.