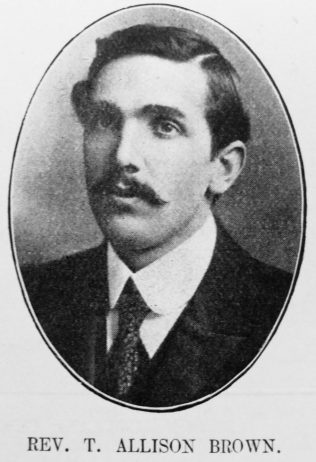 Thomas Allison Brown: born at West Auckland in 1877. After training at Hartley College, he entered the Primitive Methodist Ministry in 1903 and continued in the active work for forty-one years. He had a splendid record of service. Commencing in days of revival and power at Bishop Auckland, he later spent eleven years in Hull (during which time the beautiful Hessle church was built) and continued in other circuits in the North and West. His fine gifts as preacher, administrator, and friend marked all his work. A diligent student, he was known among his brethren as a ‘preachers’ preacher’. He was a loyal colleague and his pastoral work remains a cherished memory in all his circuits. He knew deep sorrow. The passing of his two sons in their young manhood left its mark, but drew out his Christian faith and hope. He was in Bristol during the worst days of the blitz, and his experiences there undermined his health and led to his retirement to Swindon in 1944, where he spent the evening of his days. He passed to the higher life on 4th December 1946, in the sixty-ninth year of his age and the forty-third of his ministry. He leaves behind him a fragrant memory and a gracious influence.

Thomas was born on 25 December 1877 at West Auckland, Co. Durham, to parents Thomas, a coal miner, and Sarah.

Census returns identify the following occupations for Thomas before he entered the ministry.