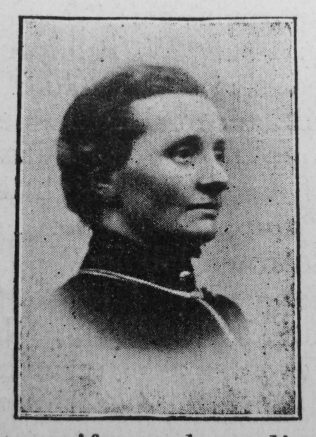 With deep regret we chronicle the death of the esteemed wife of the Rev. W.B. Cheshire, of Darlaston. She was the elder daughter of Mr. and Mrs. Robert Stagg, of Round Oak, Brierley Hill, and the sister of the Rev. H.J. Taylor’s late wife, who died at Southport, May, 1898. Born on February 14th, 1857, she was from her earliest years connected with our Primitive Methodist Sunday School at Round Oak, a school and church with historic memories, having sent a host of distinguished and widely-known workers into the ranks of our Connexion.

From a scholar she became a teacher, regular, prompt, devoted, and in this useful work she found a very helpful preparation for the larger sphere and heavier responsibilities of a minister’s wife. She was united in marriage to our dear brother, who now mourns her loss, in July, 1880. Their first settlement was at Burnt Tree, in the Dudley circuit, and there, as in all other circuits, she threw herself heart and soul into the work and interests of the Church. Then they passed on to the following circuits:- Derby First, Scarborough, Driffield, Hull Second, Old Hill, and Darlaston. In all these circuits she won golden opinions, as shoals of letters to hand abundantly testify. She was a whole-hearted Christian. Her piety was deep and genuine, though never ostentatious. In the service she rendered she was ever willing and devoted, though not obtrusive. She loved Christ and His Church, and found her highest joy in life in serving the interests of the Redeemer’s Kingdom. She was ever a worthy helpmeet to her husband in his work. How much of the success that has attended our brother’s ministry is due to her, words cannot tell.

In her own home she was esteemed precious above rubies. There she was a constant witness to the power of the grace of Jesus Christ to beautify and ennoble the life. As a devoted wife, a gracious companion, a loving, tender, self-denying mother, she has left to her husband and children a heritage that will be green and precious while memory lasts.

Owing to a weakened heart, due to rheumatic fever in childhood, she was never strong and robust, but though she passed through frequent seasons of illness, and during the last year attacks of the old trouble became more severe than ever, no word of impatience or fretfulness ever passed her lips.

The end came somewhat quickly, though not unexpectedly. In the last few hours there was a rapid failure of all the powers, and on Tuesday afternoon, Oct. 4th, 1904, at the age of 47 years, without a sigh or murmur, she peacefully fell asleep in Jesus.

On Saturday, Oct. 8th, the interment took place. The Rev. T. Parr, M.A., conducted the service in Bell Street Chapel, the Revs. J.A. Grainger, C.L. Tack, T. Whitehead, J.M. Brown, and W.H. Taylor taking part. On Sunday morning, Oct. 9th, in Bell Street Chapel, the writer paid to our now sainted sister, a well-deserved tribute of esteem. May they who sorrow in loneliness continue to be abundantly comforted and sustained of God, cheered by the blessed hope of re-union in the unending life, and kept faithful till the day dawns, and the shadows flee away, and they meet again before the throne of God.

Alice was born to parents Robert, a blacksmith, and Sarah.