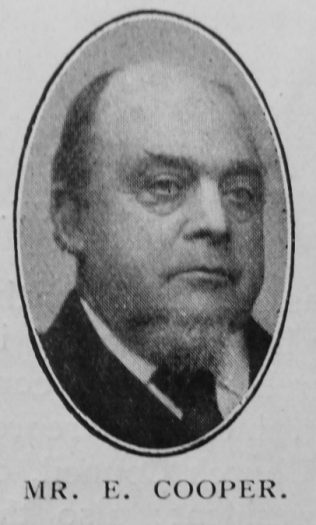 Transcription of obituary published in the Primitive Methodist Magazine by J.D.

Edwin Cooper was born 8th June, 1832, and all his life has been associated with the  Stalybridge Primitive Methodist Sunday School and Church. Upon seventy-six annual demonstrations he walked with the teachers and scholars in their Whit-Friday procession. In early life he consecrated himself to God. In the Sunday School he has acted at different periods as teacher, secretary, treasurer and superintendent. In  the church he was choirmaster and one of the most loyal trustees. The Circuit felt itself honoured in retaining him as steward for many years. His long and useful service gained the attention of other churches and Sunday School Unions.

Edwin was born on 8 June 1832 at Derby, Derbyshire, to parents Samuel, a labourer, and Sarah.