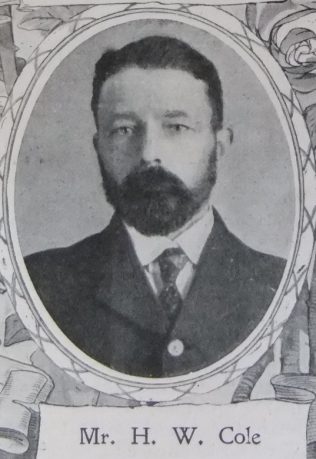 Mr. Cole, The Walthamstow Station Steward, is one of a large number of our London officials who have been reared in the villages, and in early life attached to Village Methodism. Born in 1869 in a tiny Suffolk hamlet, he came to London in 1892 and for fifteen years has quietly but faithfully served the Church of his choice.

He is a zealous Sunday School worker, an acceptable local preacher, and Society Steward at our Hawthorne Road Church.

Elected twelve months ago as the Station Steward he is filling that position with credit to himself and advantage to the Station.

He is not brilliant or “showy” or rich – but unassuming, genial, faithful, and generous. Possessing good judgement and sound common sense he is a valuable official and is highly esteemed by the whole station. We predict for him further honours from his circuit and district.

Harry’s earliest Christian associations were with the established church. He moved to London in 1892 and was converted four years later through some godly Salvationists. He joined the High Street PM Church at Walthamstow. Harry was admitted to full plan in 1899. In 1909, Harry moved to Leyton. He was keenly interested in the Christian Endeavour Society, of which he was a leader, and was rarely absent from its meetings.

Harry was recovering from an injury received at work for the Leyton Urban District Council when he suddenly collapsed at the dinner table and passed away.

Harry married Emma Lee (b1869) in the spring of 1899 at Dunmow, Essex. Census returns identify four of five children.