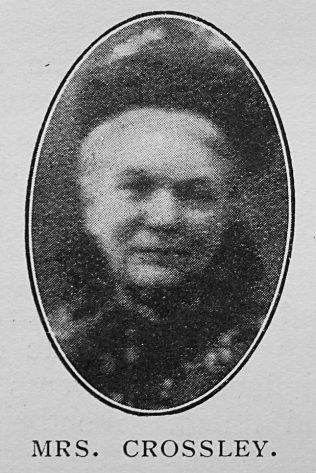 Transcription of obituary published in the Primitive Methodist Magazine by J. Pearson

Mrs. Crossley, of Tadcaster, who has recently passed from us to the homeland, was a fine type of Christian womanhood. Born at Leeds in 1846, and reared in a good Wesleyan home, in her teens she yielded herself to God at the age of fourteen, and became a member of the Wesleyan Church, Leeds. Subsequently she was married to Mr. W. Crossley, and made him a true housewife. Genial, kind and hospitable, she has ever been a source of strength and comfort to her husband.

Seventeen years ago they removed from Leeds to Tadcaster, but, unable to attend the Wesleyan Chapel, through lameness, she commenced to attend our Chapel, which was near. She at once became a member, joined the Minister’s Class, and forthwith interested herself in the welfare of the Church, both spiritual and material. In the home, which has always been open to God’s servants, love, real and deep, quietly reigned. The meekness and gentleness of her spirit was most noticeable; she was known for her charity and sympathy with the poor.

Her end came with tragic suddenness. On Sunday, Feb. 12th, 1911, she attended the morning service and seemed in better health than she had been for the last few weeks. After retiring to rest, about 1 a.m. she was seized with heart weakness, and in about twenty minutes passed to the homeland.

She was interred in the Tadcaster Cemetery on Wednesday, February 15th, in the presence of a large company of friends. Prior to proceeding to the Cemetery, a service was held in the Chapel, conducted by the Rev. J. Pearson, assisted by Rev. T. Oliver, a suitable address was delivered by Rev. J.P. Osborne. Rev. J. W. Brown, Wesleyan minister, offered prayer at the grave. May her sorrowing husband and all her children meet her in Heaven.