In the Fighting Line at Ninety-Three 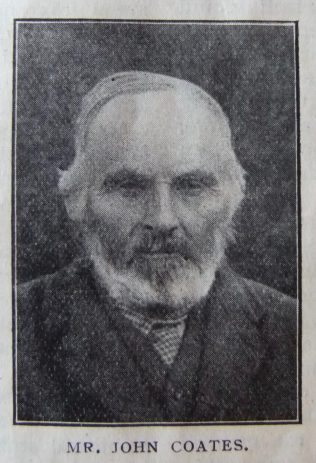 Transcription of ‘Sketch’ In the Christian Messenger by J Bilton

MR. JOHN COATES, of Marton, in the Pickering Circuit, has an unbroken membership with Primitive Methodism covering the lengthy period of nearly eighty years. Converted as a boy of fifteen at Brawby, he at once joined our Church there and linked himself with its activities, and to-day in his ninety-fourth year he is still in regular attendance and active service at our village cause at Marton, which owes much of its present vigour to the faithful attachment of such stalwarts as our aged friend.

Two years after his conversion, Mr. Coates was placed on the Circuit plan as a local preacher. This was in the days when Pickering was a part of the Malton Circuit, and the period of his active work as a local preacher covers also the time when Pickering, as an independent Circuit, included a much wider area than it does to-day, Those were the days of long tramps amid many inconveniences unknown now; but with a cheerful courage and glad heart our friend rendered acceptable service in our pulpits for a great number of years, his faithful messages with their forceful delivery winning him an abiding place in the affection of the churches.

For nearly sixty years Mr. Coates has been class leader or assistant class leader, and to this day is a regular attender at the weekly gathering of the members for testimony and prayer.

For a similar period he has also been a Sunday school teacher, and for very many years a school superintendent. He still continues to discharge the duties of the superintendency. For a school to have a superintendent of ninety-three is, we are sure, quite unusual, and probably unique, in Primitive Methodism. For many years he, along with Mr. George Turnbull, a “young man” of only seventy-three, has also conducted the School Anniversary in the village of his adoption.

Three Presidents of Conference, Revs. E. Dalton, T. Jackson, and J. Ritson, have visited Marton during their year of office, and upon each occasion the evening lecture has been presided over by our friend.

Missionary interests have an abiding place in his heart. A missionary box occupies a conspicuous place on the kitchen mantleshelf, and to the fact that it is not neglected during the year the Circuit ministers can testify. Regular also are the gifts which go to the support of our work as carried on in Whitechapel by Rev. T. Jackson and in South East London by Rev. J. Johnson. Ministers of the Circuit who have “travelled” here in past years seem also to keep his postal address in mind, and for their bazaars and other efforts appeals are continually being made.

Twice every Sunday Mr. Coates is found at our services, his interest in the messages being sustained to the last word. His is the first voice also which is heard in the Sunday evening prayer meeting, and his prayers, offered with fervour, mellowed by experience, strangely stir the soul.

The home is one in which the preacher, local or itinerant, is always welcome, and one to which he delights to go. It is a home of the stamp where family worship is never omitted, and where the choicest conversation circles round the word and work of God as seen in the churches of the Circuit, and in the wider interests of the Connexion. Connexional literature has also a regular place therein, and there is no movement in our church life of any large import to which our friend is a stranger.

Mrs. Coates departed this life thirty-six years ago, leaving three sons and one daughter, all of whom are honourably associated with our church.

Secure in the affection of the people, Mr. Coates continues to dwell in the village where for the past sixty years he has been a tower of strength to our society.

Such is a record worthy of being known by our churches at large. Local preacher for seventy-six years, class leader and assistant for sixty years; school superintendent and teacher for sixty years; and still meeting with his members in the class, and gathering with the children in the school.

In the fighting line? Yes. He attends the services of our church, shares her activities, participates in her devotions, gives to her varied ministries, and lives so as to adorn the gospel of our God and Saviour in all things. What more can he do?

For him we pray the joy of continued service here, and some day the joy of new service in the new life where years are not counted.

John was born abt 1822 at Brawby, Yorkshire.