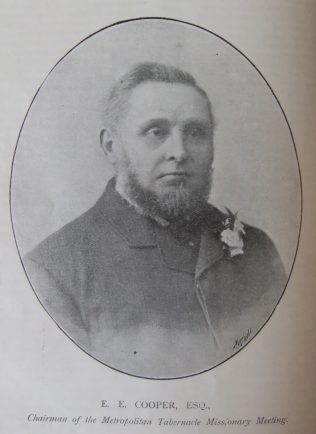 Ebenezer was born on 16 October 1830 at Brierley Hill, Staffordshire to parents William Cooper and Lydia Pearson. William and Lydia were members of the Wesleyan Church at Bank Street, Brierley Hill. William was a shoemaker. Grandfather Pearson was a noted Baptist and later Congregational layman.

As a child Ebenezer attended the Wesleyan Sunday School. He joined the PM church in February 1860.

In 1871 Ebenezer went into partnership in the timber trade with Caleb William Roberts. Later they purchased a dismantled iron works, improved them and created local employment. They then invested in a failed brickworks and later a galvanising works. By 1894 the company employed about 800 men.

Ebenezer was a striking example of a self-made man.

In the community, Ebenezer was a member of the Board of Guardians and a director of Brierley Hill Coffee House.

Ebenezer was a Sunday School teacher and class leader. He was a local agent for the British & Foreign Bible Society. In his early life he was also very involved in the Temperance Cause.

His whole family was connected with the Hill Street Chapel, Brierley Hill.

Ebenezer served as Circuit Steward and was also a director of Bourne College from its opening.

Ebenezer was Chairman of Metropolitan Missionary Meeting in 1894.