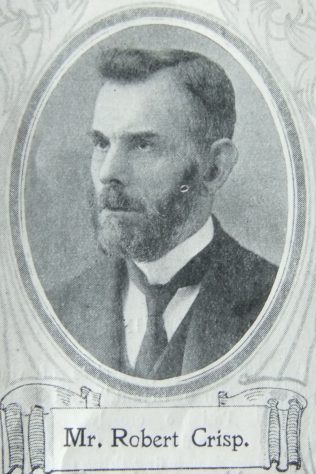 Mr Robert Crisp, the senior Circuit Steward of the Sheffield Sixth Circuit, loves Primitive Methodism root and branch. He is unfalteringly loyal to the doctrines, polity and traditions of our Church. He is a man of stalwart personality, of deep strong convictions, of indomitable will and purpose. When he puts his hand to the plough he goes on to the end. He is a villager born. He came to Sheffield forty-three years ago, from the little village of East Rudham in the Docking Circuit. And through a long number of years he has served the Church as Class-leader, Sunday School and Trust Secretary; and also as Circuit Steward, with marked efficiency and fidelity. He is a Circuit Steward with genuine Circuit interests; the work of the Circuit in all its branches is laid on his heart, while his sympathies are broad enough to include a living interest in the progress of our Church at large.

Robert was born abt 1846 at East Rudham, Norfolk, to parents Samuel and Ann. Samuel was a blacksmith.

Robert followed his father’s trade as a blacksmith.