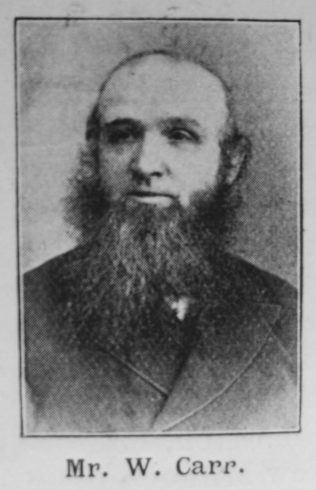 Transcription of Obituary in the Primitive Methodist Magazine by T. Sowerby

The Wakefield Second Circuit has lost in the death of Mr. William Carr, one of its oldest local preachers and officials. For over 40 years Mr. Carr filled more than ordinary place in our church, and his removal is keenly felt. He began preaching before he was twenty years of age, and throughout his busy life found one of his chief joys in the ministry of the Word, and many remember with gratitude his wise and often able expositions of Scripture. His individuality and courage of conviction stamped themselves upon all his work. No greater joy could be given him than that of leading men to Christ and strengthening the faith of believers.

In his official life his zeal and enthusiasm for the cause of his Church was conspicuously manifest. Many of our chapels in this and other circuits owe him gratitude, but perhaps the outstanding instance of his devotion to the material interests of the Church is New Millerdam, in this Circuit where, in a time of stress and strain, he took upon himself heavy burdens and responsibilities, and the easy position of that church now is largely owing to his efforts. The material and spiritual prosperity of the Church was his daily thought. In his family life he was a true and consistent follower of Christ, living before his children in the grace of God. Business considerations were never allowed to interfere with Christian duties in the family, and his children were all trained in active service for Christ. His son, Rev. W. Bramwell Carr, is now serving in one ministry with much acceptance and success. He had a noble wife, whom to know, and whose friendship to win was a prize of priceless value, and to whom our brother owed more than words could say or describe. B. Walmsley, Esq., of Leeds, for many years a close friend of deceased, says: “I found him a kind and helpful Christian brother. When I was transferred from the Sharlston Society to re-open our cause at Normanton, Brother Carr took a deep interest in all pertaining to the mission. In the early time labourers were few and funds low, so that it was a struggle in every way, but the help rendered by Brother Carr is still fresh in my memory Whenever he could be spared from the society of which he was the head, he willingly came to labour, counsel, and render financial aid when things looked at their worst.”

Rev. J.C. Livesey, whose acquaintance with Brother Carr dates back to 1874, says; “He could not be otherwise than an active member, and take a practical and energetic share in the work of any society or church with which he was identified, and whether he was associated with New Sharlston, or Normanton, or Wakefield, or New Millerdam, he must of necessity put into it his very best thought and endeavour, and be a living embodiment and evidence of the text ‘ Whatsoever thy hand findeth to do, do it with thy might.’ His methods and plans might not always be approved by others, but that did not deter him from pushing them to an issue with all zeal and enthusiasm. After his retirement from business he told me that his greatest desire was now to spend his days in brightening the hearts and lives of others, and do all the good that lay in his power.”

During the last twelve months of his life Brother Carr suffered keenly, but bore all with patience, cheerfulness and hope. He peacefully “fell asleep” April 2nd 1902. funeral service was conducted  in the Belle Vue Church, the Revs. B. Haddon, J.C. Livesey, J.S. White, and T. Sowerby taking part, and the interment took place in the Wakefield Cemetery. A very impressive memorial sermon was preached on the following Sunday week by Rev. B. Haddon. “He has gained the rest of God’s own and his words do follow him.”

William worked as a grocer.