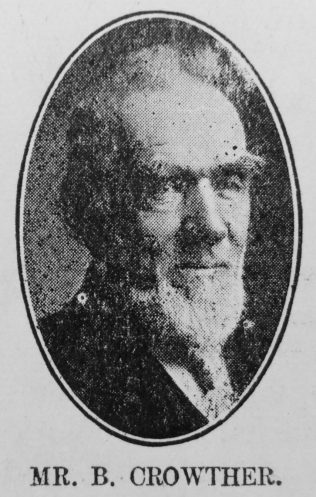 MR. BENJAMIN CROWTHER was born at Greet’s Green, July 4th, 1833. From his earlier days he was a follower of the Lord Jesus. Before arriving at his twentieth year he was engaged in Christian service. Greet’s Green witnessed his early devotion to the church he loved. Among his own people he shone brightest, and many are the abiding evidences of his unstinted labours for God and His people.

Coming to reside in West Bromwich, upwards of twenty-five years ago, he threw himself heartily into the affairs of Queen Street Church. Called to be school superintendent he continued in office till his death, and numerous are the testimonies to his kind and loving treatment of the young. For many years he served the West Bromwich circuit as its faithful steward. His guiding word in perilous hours is something to which many ministers can testify. He was honoured by all, not because of his gifts of money alone which were numerous, but because of what he was—a burning and a shining light.

Our friend fell asleep January 29th, 1909, with the light of God on his face. We pray for his devoted widow and his affectionate family. “He being dead yet speaketh” in tones beseeching and irresistible.

Benjamin was born on 4 July 1833 at Greet’s Green, West Bromwich, Staffordshire, to parents John, a boiler plate roller (1851), and Mary. He was baptised at the Particular Baptist Chapel, Coppice, Staffordshire.