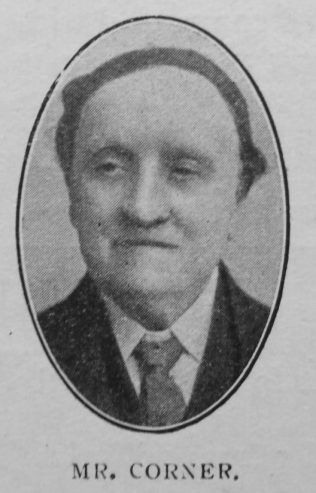 Transcription of obituary published in the Primitive Methodist Magazine by R.S.

Born at Maltby, near Stockton-on-Tees, in 1822, Mr. Robert Corner was in early life engaged as a farm servant. Removing in his twentieth year to West Hartlepool, he worked for contractors on the first pier for three years. Subsequently railway construction occupied him on the York and Market Weighton branch of the Newcastle and Berwick line, and assisted in putting in the foundations of the High Level Bridge.

Marrying Miss Cook, of Boultby, he settled in Hartlepool. Here he worked as a trimmer, while his wife carried on a  grocery business, to which he subsequently devoted  himself and was most successful. Through the influence of his wife, who was already a member with us, he joined our Church, and for half a century was a leading official in Brougham Street Church, holding every office except that of a local preacher. He was loyal and devoted to the church, and one of his last acts was to give £100 towards the new church, at Central Estate, Hartlepool.

After several years of widowerhood he married Mrs. H. Jeffels, of Scarboro’. For some time before his death it was apparent his physical energies were declining. He passed away in quiet trustful confidence March 7th, 1907, and was buried beside his first wife in Hartlepool Cemetery amid many expressions of regret.

Robert was born in 1822 at Maltby, nr. Stockton on Tees, Yorkshire. I have not been able to identify his parents in online records.