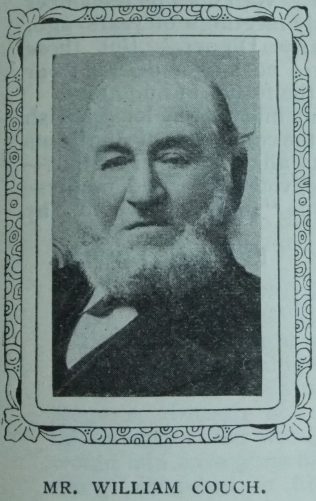 Mr. Couch is a local preacher in St. Ives Circuit, Cornwall. Before he was admitted to full plan, he did much public work as a member of a mission band, conducting evangelistic services, his fine stentorian voice well fitting him for outdoor services. Born in 1832, he was consecrated to God by association with our Church from his earliest days, his membership being recognised since he was sixteen years of age. He has been a class leader and society steward for many years; his numerous family he has sought to train in the way they should go, and not without success.

William was born abt 1832 at St Ives, Cornwall to parents William and Mary. William, senior, was a fisherman. William was baptised on 6 December 1833 at St Ives.

William worked as a fisherman.