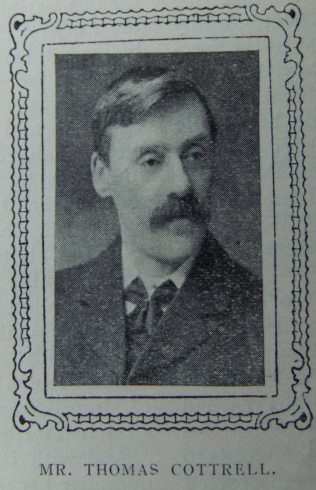 MR. THOMAS COTTRELL, the subject of this sketch, is a native of Biddulph. He enjoys such advantages as come from a godly Methodist ancestry. He is a Primitive Methodist of the third generation. His paternal grandfather was an efficient local preacher in the Wesleyan Methodist church, but his maternal grandfather was one of the outstanding workers in our church in the earlier stages of its history, and he left behind him the legacy of a “blessed memory.”

Mr. Cottrell has been connected with our church and Sunday school all his days. He has filled the positions of teacher, assistant secretary, and general secretary of the school with credit to himself and satisfaction to the school authorities. Enfeebled health compelled him, a few years ago, to relinquish the secretary-ship, but he still serves the school in the capacity of financial secretary. He has also served the church in a very acceptable manner as organist for the past twenty-five years.

Mr. Cottrell decided for Christ during a Mission conducted by Mrs. Bosworth, of London, for who he still retains a very tender regard. Having put his hand to the plough he has not looked back.

His esteemed father held the office of Circuit steward from the formation of the Bradley Green Circuit until he was called to the higher service of the heavenly life. Mr. F. Chaddock was then appointed to fill the vacant place, and Mr. Cottrell succeeded him as society steward. He has in every way justified the appointment. In his quiet, unobtrusive manner, he watches over the various interests of the church, and with tact and aptitude he manages its affairs.

Thomas was born in 1867 at Biddulph, Staffordshire, to parents John and Elizabeth. John was a coal miner and draper at the time of the 1861 census. Later he is described as a draper.

Thomas followed his father as a draper.