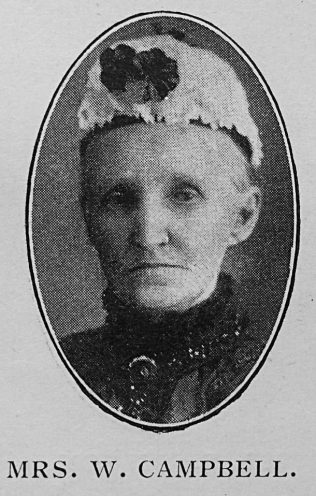 Transcription of obituary published in the Primitive Methodist Magazine by A.J.C.

It is with sincere regret that we intimate the death of Mrs. Wm. Campbell, who passed away at the residence of her son William, Sunderland, on Friday, July 29th, 1910, in her seventy-sixth year. Although on the death of her husband Mrs. Campbell removed from Shotley Bridge to Sunderland, she still retained her membership with the little village society, and had her ticket sent regularly each quarter, and contributed to the funds of the church. Mrs. Campbell was one of the most charming personalities in the ancient village. The children knew her, and to the last she loved to have them about her. The young people of the church found in her a cheery and inspiring presence. No godly cause ever knocked at her door in vain. The keynote of the whole of her long and busy life was love and self-sacrifice.

Her home in the village was for fifty years the gathering place of Primitive Methodists from far and near; she had the mystic power of transforming the barley loaves into holy banquets. Two of her sons are ministers of our Church, Revs. A.J. Campbell and Edward Campbell; also a grandson, Rev. W.H. Campbell. Another son, William, is a local preacher at Sunderland III. Circuit; another grandson is a local preacher at Glasgow V. Circuit.

We laid her to rest in the Blackhill Cemetery on August 1st, 1910. Rev. T. Elliott, an old family friend, gave an address worthy of the man who gave it, as it was worthy of the woman of whom he so fittingly spoke. Rev. E.B. Storr (Circuit minister) also took part in a most impressive service. As her mortal body was being committed to the grave, one who knew her well for fifty years said, “She was  one of the finest types of womanhood it has been my privilege to know}; so modest, so true, so radiant, so helpful; truly she was a succourer of many, and of me also.”