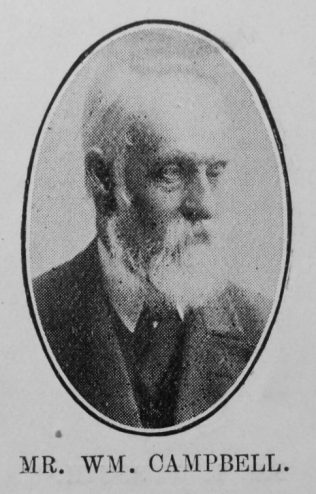 Transcription of Obituary published in the Primitive Methodist Magazine by A.J.C.

Shotley Bridge Society and Circuit have sustained an immense loss by the death of William Campbell, on November 5th, in his seventy-sixth year. A large and representative gathering assembled at his interment, the service being conducted by Rev. Thomas Elliott (Shildon), assisted by Revs. E.B. Storr and J. Rutherford.

A man of unobtrusive habits, gentle, generous, kindly, a helper of every good cause, he had yet a busy brain and a wide outlook on life. His devotion to duty was conspicuous. He shirked no toil however irksome, and it is questionable whether the beautiful sanctuary at Shotley Bridge would have been built but for his tireless, self-sacrificing labours. For that church he lived, and he loved it to the day of his death. He loved the young, and as Sunday School superintendent, teacher of the young women’s class, and president of the Endeavour he was in his element. He was foremost in all the schemes and plans of the young for the church’s welfare. He radiated kindness and sunshine, and men were irresistibly drawn to him.

His home life was full of charm. For fifty years his house was the preachers’ home; “its gates were open continually,” and there a gracious and generous hospitality was dispensed. Says one of his sons, “The whole family of us were won to God by two things—a bright, cheerful, self-sacrificing, devoted mother, and a father’s wooing tenderness and ever-watchful solicitude.”

Scores of letters have been received by his widow, witnessing to the unfailing kindness, gentleness and sweetness of his home life. “Listen! I hear them singing!” he said to his watching wife, as he lay calmly expectant, with a strange, far-away look in his eyes. No sound came to other ears save the roar of the street, but he heard the beating of angels’ wings and the songs of angels as they came that Monday morning at 9.30, and carried him home. Farewell father, “till the day breaks, and the shadows flee away!”