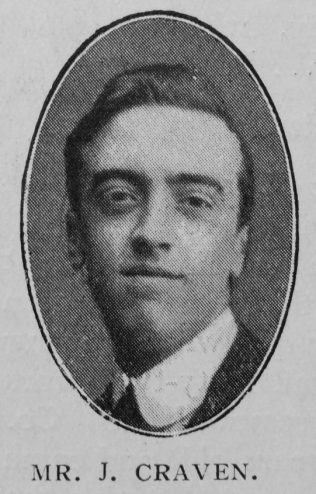 The King Street Church, Stretford, has lost one of its brightest and most promising young men by the death of James Craven, which took place at the residence of his grandfather, Mr. James Gibbon, on June 16th, 1912. He was in his twentieth year, and although cut off on the threshold of manhood, his character was rich in gifts and graces, and gave promise of a very useful and devoted life.

He was the child of careful religious training, brought up in the atmosphere of the Church, and he was a great joy and comfort to his mother. As a scholar in the Sunday School he was most regular and punctual. He was a member of the C.E. and of the choir, and an enthusiastic missionary collector. The large numbers present at his funeral testified to the esteem in which he was held:

James was born abt1893 at Adwick, Doncaster, Yorkshire, to parents Charles Craven, a railway porter (1891), and Eliza Gibbon.