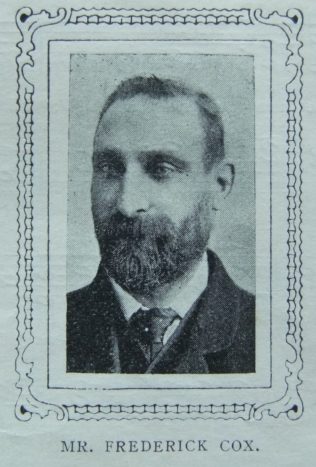 THE subject of this sketch is one of the solid supports of Colchester Primitive Methodism. For the last thirteen years, Mr. Cox has steadily and ably pursued his duties as the principal Society steward in Artillery Street Church, a church that has become historic because of its associations with Charles Haddon Spurgeon’s conversion. Mr. Cox has ever stood true to his Methodist principles and has always proved himself to be the minister’s friend.

He was born on October 3rd, 1852, in the neighbouring town of Halstead, and reared in a godly home. From Halstead he removed to Colchester, where he was soundly converted under the ministry of the Rev. Robert Durrant, and from that time forward has walked worthily in the vocation wherein he was called.

In 1872, Mr. Cox married Miss Warner who has proved a true help-meet to him in every way.

By trade a painter, our friend has often given his services gratuitously in connection with the church of his choice. Depression in trade has forced him into other channels, but his readiness to help on the work is still keenly manifested, even in his reduced circumstances.

In September, 1908, Mr. Cox became Society steward at Artillery Street, and has held the office up to the present time, during the ministries of the Revs. W. Moore, R. Holman, C. Higgins and W. H. Lawson, seldom, if ever, being absent from his post, and always carrying out his duties with punctuality and perseverance.

Every means of grace that opportunity affords, our brother attends. His life compels attention, for he seeks to live blameless in the eyes of his Saviour.

Frederick’s mother, Elizabeth, was widowed by the time of the 1861 census. She earned a living as a carpet weaver. She  married James Spurgeon, an agricultural labourer, in 1863.

His obituary records that he became Society Steward at Artillery Street in 1898, not 1908 as published in the sketch above.