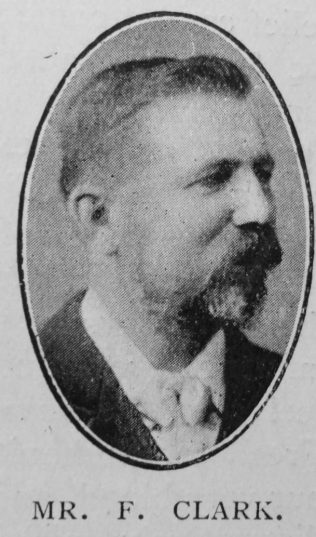 Transcription of obituary published in the Primitive Methodist Magazine by G.T.C.

In the passing of Bro. Francis Clark the Ebenezer Church, Hull First Circuit, has experienced a great loss. He early became a scholar at West Street, but on the opening of the school at Ebenezer, identified himself with the work there and became one of the first teachers. As Superintendent of the Sunday School, and later, as President of the Institute, he rendered eminent service. For many years Bro. Clark was a Class Leader, and was singularly fitted for this work. He was also a Local  Preacher, and exercised his gifts to the great profit of the Churches. He preached an impressive sermon in Jubilee Church on September 3rd, only three weeks before his death.

Many testimonies have been received of his faithful work. Rev. J.H. Hirst writes:—“Bro. Clark was one of the most faithful friends of Ebenezer, loyal, generous, and thoroughly reliable. A most appreciative hearer and a true friend of the minister. He was one who cheered and encouraged. A man of power in prayer, fervent, and of deep feeling. For years past I have valued his work and worth, and count it one of the joys of my ministry to have been associated with him. A lover of Zion, he gave of his best and found his highest joy in service.”

The funeral service at Ebenezer on Sept. 26th was conducted by Revs. G.T. Chapple, G. Bennett, W. Smith, T. Featon, and L.H. Wood. On the Sunday following an impressive memorial service was held.

Francis was born in late 1853 at Hull, Yorkshire. I have not been able to identify his parents in online records.