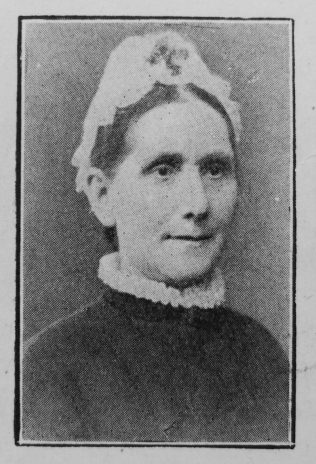 Caroline Clayton, of Codnor Park, Ripley Circuit, had a lifelong connection with the Primitive Methodist Church. Her mother was a member of Greets Green Society, West Bromwich Circuit, and sent her daughter to the Sunday School. In her girlhood she was a member of the choir, and joined the Church when about eighteen years of age. She became an active worker. In 1848 a mission was conducted at Greets Green by Thomas Lissimore in which our sister was earnestly engaged. Amongst the converts was the young man who afterwards became her husband. Their house was a Primitive Methodist, home where all preachers were welcomed.

Mr. Clayton became a very effective local preacher and worker until his death three years ago.

In the year 1860, the family removed to Silverdale, and for twenty-two years Mrs. Clayton engaged in all kinds of Christian service, especially in Bazaar work, tea meetings, etc. There also she was a constant attendant at class meeting and acted as visitor of the sick and absent members. She ever rejoiced to help the poor and needy to the utmost of her ability.

In 1882 the family removed to Codnor Park, and there she joined hands with the members of our church, and continued with us till her death, May 25th, 1907, at the age of seventy-nine.

Lately her health was poor and she could not get to the services, but she retained her interest in the work.to the end. She was a good mother, an earnest Christian, and a loyal member of her own Church, and had great joy in seeing several of her children truly converted, and some become active officials in the Church. She was greatly respected and her memorial service was largely attended on Sunday, July 7th, when the Circuit Superintendent was the preacher.

Caroline was baptised on 27 April 1828 at West Bromwich, Staffordshire. Her parents were William Miles, a farmer, and Hannah.

She married George Clayton (1830-1904) in early 1851 at west Bromwich. George was a foreman, and by 1871 had moved into management roles in ironworks. Census returns identify nine children.