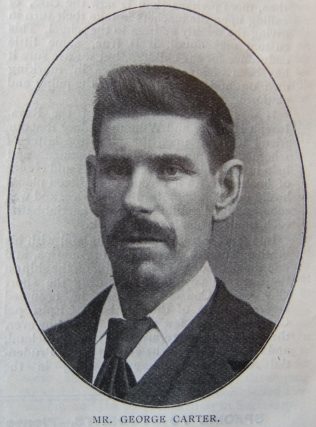 Ian MacLaren (Dr. John Watson) is of opinion that, “whenever it is possible, the future minister should be trained for his profession from boyhood.” One fears that this can only be but a “pious opinion for the regular ministry, and if it were made to apply to local preachers, than a vast host of men who are now doing marvellous service for the Kingdom of God would never have found themselves as preachers of the Word. One rather turns to the Biblical note, which is, :The wind bloweth where it listeth,” and in many cases, perhaps in the most, the movement is not sufficiently distinct in boyhood to mark out the ambassador of God, the legate of heaven in the things of the Gospel. Preachers of all descriptions must have their vocation not by “the will of flesh, but by the will and appointment of God. It is certainly only thus we can understand the call and career of the subject of this sketch.

Mr. George Carter was born at Radstock, Somerset, in 1857. His parents were people in humble life, the father being a pit-banks-man, a victim of social neglect, left to work for the lowest possible wage, and for whose relaxation from grinding toil society provided little beyond the “public-house,” an institution which, down to very recent times, we have been concerned to treat with great tenderness and consideration. For much British policy has been governed by the watchword, “Don’t rob the poor man of his beer.” Little wonder, therefore, at a period when education was at a discount, and the ale-house afforded the only bit of colour that men could find on release from the drab and monotony of their toilsome lives, that George’s father spent time and money which should have gone to brightening the home. His mother was a woman of strong common sense, and though she could not read until she turned sixty years of age, she brought her children up carefully, and they were early sent to the Sunday school in connection with our Church.

Of day school education our friend had very little, partly because little trouble was taken by anyone whether he attended school or no, and he confesses to not having had, at that time, very much liking for it. Like most boys, indeed, he would probably have sympathised with the little fellow who was asked if he liked going to school. “Yes, very much,” was the reply, “and I like coming back, too; but I don’t like staying there between times.” At the tender age of nine years he had to go out into the fields, his first occupation being that of scaring crows, at the magnificent salary of fourpence per day. His next place was in the brick-yard, and then at ten he went into the mines, and for weeks together he only saw daylight on the Sabbath days. The Sunday school, however, was like a breath of heaven to him, and though he reached the age of eighteen before he was definitely converted, yet such were the godly impulses to discipleship and even preachership of earlier days, that if just the right guidance had been afforded, there is little doubt that he would have been won for the Master as a lad.  Soon after his conversion he was appointed a leader, and the wholesome practice obtained then, more perhaps than now is the case, of calling upon the teachers to take their turn in giving the weekly address to the school. This custom may entail, it is true, some little endurance for the children, but we are sure it has been of invaluable service in marking men out and training them for the pulpit and platform.

It was under the ministry of the Revs. Joseph Harding and William Radnor that our friend was put upon the plan, the latter of whom gave him much encouragement and help in the guidance of his studies and choice of books. With a Circuit of eighteen places he did not lack opportunity for service, and was soon engaged some ten or eleven Sabbaths each quarter in preaching work.

In the year 1881 he left England with his brother Tom to seek work in America, and had the distinction of preaching on the ship on the outward voyage, and during a short stay with Cousin Jonathan he occupied several pulpits of the Methodist Episcopal Church. Some few months later, however, the two brothers returned to the homeland, and George entered the service of the Prudential Assurance Company, settling in the Mangotsfield Circuit, which now forms part of the Bristol Fifth station.

In 1887 he removed to Poplar, in which Circuit he still resides, and where he is much respected. Mr. Carter has enjoyed the confidence of his official brethren to quite unusual extent, having been elected four times delegate to the District Meeting and twice to the Annual Conference. He is also a member of the Connexional Local preachers’ Training Committee, and also the Centenary Committee, which affords some clue to his soundness of judgement and wisdom in counsel. He has considerable skill in getting to the “bottom fact” of most matters, seizing the salient and material points of a case, and in all his movements he is actuated by a spirit of downright fairness and impartiality. Provincialisms still cling to him somewhat, and he is much more concerned for strength of phrase than mere prettiness or elegance, but he speaks with remarkable accuracy and aptitude. The Rev. W Radnor says: “His examination papers and earlier sermons were such that his lay brethren considered they were more like the product of a Doctor of Divinity than a collier lad.” He has considerable homiletic faculty, great knowledge of, and sympathy with the higher aims and ideals of the common people, which combined with unwavering loyalty to our blessed Lord, make him not only very acceptable in his own Circuit and district, but much sought after by other Churches and public bodies. Not long before his death, the Rev. Robert Bryant told the writer of the great pleasure he had had in hearing Mr. Carter preach at the District Camp Meeting.

Though he had not a preaching ancestry, two of the Carter brothers have been local preachers, and Mrs. Carter’s grandfather, her father, and three brothers were all engaged in the same blessed work. A very appreciative article upon his brother Tom, who died in Warwick in December, 1901, and had a public funeral, was inserted in the CHRISTIAN MESSENGER for January, 1902, written by Mr. H. Jeffs, a life-long friend of the family.

Our friend had a very severe illness some five years ago, but he is now happily, in good health and vigour, and , we trust, may long be spared to the Church by whose agency he was won to God, to which he is much attached, and for which he is still doing valuable and much appreciated service.

George was born at Radstock, Somerset, to parents Richard and Susanna. Richard was a coal miner.

George married Ann Seymour (b1855) in the summer of 1876 in the Clutton Registration District, Somerset. Census returns identify seven of eight children.