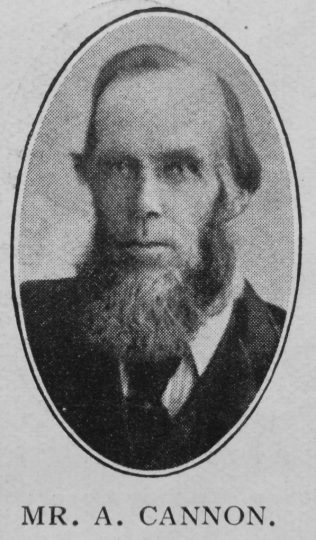 Transcription of obituary published in the Primitive Methodist Magazine by John T. Stead

Alfred Cannon is the second stalwart who has been called home from North Moreton, in the Wallingford Circuit, during the last 12 months. He spent nearly the whole of his life of 78 years in this quiet village. He was not a man who said much, but he was a man whom everybody believed in. For some years he was a pensioner of the Great Western Railway system, and in the days of his prime he surrendered a superior position for a lower one because of his conscientious objection to work on the Sabbath. He was 30 years of age or more when he was converted, but for over 40 years was a very acceptable local preacher on the plan. He, with the late Mr. Arthur Holloway, took a pride in Sunday School work, and since their death the School has had to be abandoned for want of workers.

For some years he had been afflicted, but was always resigned, and had no doubts as to his acceptance with God and his hopes beyond the grave. It was a pleasure to visit him in the almshouse in which he resided the last few years of his life.

A few days before he died, thinking his end was near, he sent for the superintendent minister that he might request to be laid to rest in the village churchyard by his own people, hence after his departure a special service was held in our North Moreton Chapel, the Circuit ministers conducting the ceremony, and many Circuit friends attended to show their esteem.

We shall have difficulty in filling the places made vacant by him and many others who have of late years been called home from the Wallingford Circuit. Only sterling character could have won the universal confidence Alfred Cannon enjoyed, and that is the thing that abides. His is the house not made with hands eternal in the heavens.

He married Selina Beasley (1824-1885) in late 1871 in the Wallingford Registration District, Berkshire.

He married Rachel Martin (b1839) in early 1891 in the Wallingford Registration District, Berkshire.