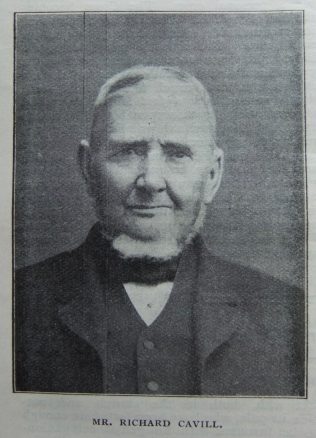 Transcription of Sketch in the Christian Messenger by Geo. Annakin

Mr. Richard Cavill, the very worthy subject of our present sketch is one of those numerous individuals over whom Primitive Methodism, in the name of Christ, has thrown its eminently benign and elevating influence, greatly to its own advantage, the supreme good of the parties themselves, and the highest welfare of a goodly number of others they have subsequently come into contact with in their passage through life. For over sixty-two years our highly esteemed and venerable friend has been very honourably connected with our church at Swinefleet and Goole, and during the whole of that lengthy period of time has lived a very useful life, and exerted a highly beneficial influence upon a great number of people he has met with, both in the church and outside its pale, who have been fortunate enough to be favoured with his genial companionship, wide and varied experience, wise counsel and truly consistent and elevating example. Mr. Cavill began his career in this world at a place called Holme, on Spalding Moor, in the West Riding of Yorkshire, on the 15th of January, 1819, and is now over 85 years of age. While quite young, when living there, he went with his grandfather to the religious services which were held in the Wesleyan Chapel. At a very early age he came with his parents to live in the important village of Swinefleet, which is situate upon the south bank of the far-famed River Ouse, about three miles from the prosperous and growing town of Goole. Soon after taking up his abode in this village he had a very narrow escape of terminating his career in this world by falling down a large ladder which he had climbed in a spirit of boyish fun and adventure, and which he came down much more quickly than he went up, feeling a good deal shaken and stunned by the fall. When about fifteen years of age he left home for farm service, and spent his first year in this capacity with a farmer who then lived in the same house at Ousefleet, where one of his married daughters, Mrs. Phillipson, with her husband and children now dwell. On the whole he spent something like five years of his valuable life in service of this kind. During that time he often attended Divine worship held in Episcopalian, Wesleyan, and Primitive Methodist sanctuaries at Swinefleet, Whitgift, and Reedness, where he received a good deal of valuable religious instruction and counsel, and often felt strong secret longings after spiritual and eternal things. It was not, however, until he was better than three and twenty years of age that he fully decided to separate himself from the world and unite with the people of God. This he did some time during the year 1841, when he began to meet in class with our people at Swinefleet, hoping through its agency the better to find his way to Christ and His great salvation, which he was now most deeply anxious to possess. Having taken this eminently wise and important step, one day when crossing a field and silently lifting his heart to God for spiritual guidance and help, light from heaven seemed to fall so richly and clearly upon his perplexed and anxious spirit, that he was able at once to see Christ as his all-sufficient Saviour and Friend, and from that time ever after to bear glad and positive testimony to the preciousness and strength of His regenerating and sanctifying grace. From then till now he has been connected with our church at Swinefleet, with the exception of about two and a half years which he spent in Goole when he was a member with our people there. Better than two years after his conversion and union without church he turned his attention from work upon the farm to breadmaking, and afterwards became a baker and carrier. In the latter capacity he regularly travelled between Swinefleet and Goole for nearly six and thirty years. For many years of this time also he went to Howden every Saturday, and both his horse and cart passengers parcels, and other goods, had to cross the deep and broad river Ouse twice a day, however rough might be the weather, troubled the water, or at times dangerous and untrustworthy the boat. For many years now he has kept one of the chief grocers’ shops in the village of Swinefleet, and, with the assistance of his unmarried daughter, still carries on this business in the principal street of the place.

When about twenty-seven years of age he married Miss Annie Cowling, of Swinefleet, who was also a true disciple of Christ, with whom he lived in the happy bonds of Christian wedlock for about 47 years. As the fruit of this union there were born unto them four sons and five daughters. Two of the sons are dead and one daughter, the rest remain, and several of them are connected with our people in different places in the country. About four years after our brother had found the pearl of great price, he entered our Sabbath school as a teacher at Swinefleet, and made himself useful in imparting to the children and young people the knowledge of sacred truth which had already been revealed to himself. Some time after he had begun this important work he was made one of the four superintendents who were then connected with the school. From this position he gradually rose, step by step, to be the senior superintendent, and for the lengthy period of 47 years, without a break, he has held this highly responsible place, and ever discharged the very onerous and important duties connected with it, with much credit to himself, and great good to the children and young people under his care, and with pleasing satisfaction to his fellow workers in the school and the parents of the scholars. During that time he has had the great pleasure of seeing many of the officers and teachers grow in intelligence, piety, and influence; the young men and maidens from time to time give their hearts to God, and become active and useful members of the church; the scholars so increase in numbers that the schoolroom has had to be enlarged, and much requires further enlargement at the present time as it is quite full of bright-eyed, intelligent children and young people whom it is always a great delight to see, and a rich treat to hear sing the sweet and appropriate hymns out of our very excellent Sunday School Hymnal. Mr. Cavill is now too aged and feeble to do much work either in the shop, church, or school. Still, as he has strength and opportunity he tries to do what he can in all; and such is the deep and tender affection in which he is held by all his fellow officials and teachers, that they have freely requested him to retain the honour of the office of senior superintendent up to the present time, and at their last yearly meeting unanimously decided to give him three valuable books, as a small expression of their sincere and affectionate regard for the past long and faithful services he has rendered to the school. The books selected for this purpose were “Jesus, the Carpenter” and the “Life of St. Paul,” by Robert Bird, and the best bound copy of the “Life of Parkinson Milson.” These three very precious volumes, with a suitable inscription in each, on behalf of the authorities of the school, were presented to Mr. Cavill by the superintendent minister in the presence of the officials, teachers, scholars, and a goodly number of other friends on the 13th of March, 1904. Mr, Cavill received them with much characteristic modesty and gratitude, and in a very neat and pathetic little address, said, “While he very sincerely thanked his brethren and sisters in the school who had so kindly remembered him in this very pleasing way, he could truthfully say he had neither sought nor expected such gifts at their hands. The work he had done both in the school and the church had been to him a real labour of love, and he had done it heartily as unto the Lord and for the highest welfare of his fellow creatures, and especially the young and rising race. He was only too sorry his advanced age and increasing feebleness compelled him to relinquish much of his truly beloved and active employment for the Divine glory and the wellbeing of men. Still, in this, as in everything else, he bowed cheerfully and absolutely to the will of God, and looked forward with a bright and inspiring hope to the time when all his work on earth should be fully accomplished, and he could have the unspeakable pleasure of hearing the Master say, “Now rest from thy labours, and enter My eternal joy.’”

In closing, we may add, Mr. Cavill, in addition to his work in the Sunday school, for which he received the medal from the authorities of the “Sunday School Companion” some few weeks ago, has rendered good service to our church at Swinefleet for many years; as a trustee for our church property in the place; a class leader of a very efficient character; and since the deeply lamented death of the late Mr. J.B. Lilleyman, as Circuit steward. Though now very feeble in bodily health and vigour, yet his mind is very bright and active, and he is remarkably cheerful in the midst of his growing physical infirmities, and deeply interested in everything that relates to the welfare of the church and school, with both of which he has been so very long and happily connected, and the highest good of the large and prosperous village in which he has spent the great bulk of his very valuable life. All who know him well esteem him very highly indeed, for his godly sincerity, his sterling moral integrity, and genial Christian spirit and conduct, and fervently hope, though his day of Christian service in this life has already been unusually long, that it may yet be stretched out a little further still, and when it reaches its inevitable close, his sun may set in a clear sky, and rise again in more than earthly beauty and brightness in that world where the dark clouds of sin and sorrow never gather, and the stormy winds of time never blow. In this kindly hope the writer of these lines very sincerely unites.

His obituary records that as a boy Richard was blessed by Hugh Bourne and also heard William Clowes preach.

Richard died in the spring of 1917 at Swinefleet, Yorkshire.