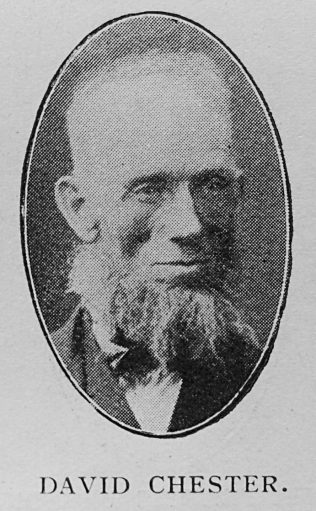 Transcription of obituary published in the Primitive Methodist Magazine by S.B.

No man was more highly and deservedly esteemed within the borders of the extensive and beautiful vale of Belvoir than David Chester (“Old David” as he was lovingly and familiarly called), who passed to the homeland on May 6th at the age of seventy-seven. By his decease the Melton Mowbray Circuit loses one of its most loyal members. For nearly sixty years he had been in membership with our Church, and had served the Society at Long Clawson with commendable zeal and untiring devotion.

The welfare of this village cause was his chief concern, and as long as he was able he attended with regularity and frequency the house of the Lord. The sphere of Christian service that lay nearest his heart was the care of the children. He founded the Sunday School, and for a long period of years was Superintendent, trusted and loved by child and man alike. His remains were laid to rest in the Clawson Cemetery, after an impressive service in the chapel, conducted by Rev. S. Buckley. A memorial service was conducted the following Sunday by Mr. J.B. Miller.

For the aged sorrowing widow many prayers are offered that she may be divinely sustained.

David died on 6 May 1911 at Long Clawson, Leicestershire.