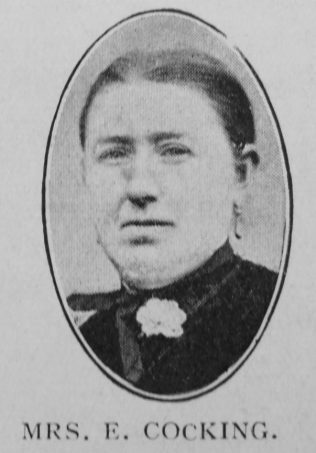 The death of Mrs. Esther Cocking has taken from us a Primitive Methodist of the good old-fashioned type, one of those who find their chief pleasure in the things of home and religion and who are steadfastly devoted to their own Church. She was born at Eastoft, in the Crowle circuit, in 1843, her parents being members of our Church. She came with her husband to Frodingham (now in the Scunthorpe circuit) forty years ago, and here they lived together for the remainder of their lives.

Mr. Cocking, who was a trustee of our New Brumby Church, died a year and a half ago. Their home life was adorned with a beautiful simple piety. Their family Bible was soiled and worn with continued use. Family worship was an institution in their home. She set great store by her class tickets and carefully preserved them all through the many years of her membership.

She was spared the pain of a lingering affliction, being suddenly called to the home above on Sept. 30th in the sixty-ninth year of her age. But she has left behind her a precious memory, and her family and church mourn the loss.

Esther was born in the spring of 1843 at Eastoft, Lincolnshire, to parents William Cash, a beer house keeper (1851), and Elizabeth Everatt. She was baptised on 16 July 1843 at Crowle, Lincolnshire.

She married Thomas Cocking (1845-1911), an iron furnace labourer (1901), in the spring of 1866 in the Goole Registration District, Yorkshire. Census returns identify two children.

Note: Many of the earlier records spell the surname “Cockin”.