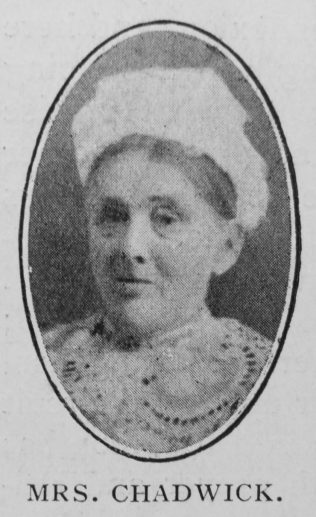 Transcription of obituary published in the Primitive Methodist Magazine by J. Bastow Wilson

Mrs. Samuel Chadwick, who passed away Feb. 24th, 1911, aged seventy-seven, was born at Heywood, near Manchester, and was one of the first scholars of the Wesleyan Methodist Church. Her husband, Mr. Samuel Chadwick, was a very popular Local Preacher for nearly fifty years.

During that long period she heartily sympathised with her husband’s religious activities, and kept an open house for preachers. For a number of years she was unable to get to the means of grace, but the ministers always found that her interest in whatever concerned the Church never slackened.

After five weeks illness she passed peacefully away, and was interred at Baum on February 28th, 1911, Rev. W. Huffington officiating.

Martha died on 28 February 1911 at Barrow in Furness, Lancashire.