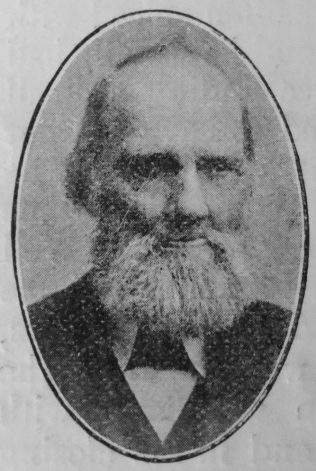 Robert Clucas was born at Maroun in the Isle of Man, February 2nd, 1827, and passed to his reward from Lower Foxdale, April 21st, 1908, so that he had reached the ripe age of eighty-one. It was not until after his marriage that he was brought to a saving knowledge of the truth. His spiritual renewal brought with it an intellectual quickening, and so made him efficient for the various offices which he was afterwards called upon to fill in the church. First and foremost must be placed that of a local preacher, a position to which he was most devotedly attached and in which he rendered conspicuous and faithful service. Fifty years ago the journeys were long, but to him distance was no object.

He is considered to have been one of the most successful soul winners on the island. He was an evangelist of remarkable ability, and attained considerable popularity, leading many who are now esteemed officials themselves into the fold of Jesus Christ. He was a class leader for many years and out of a rich experience sought to give spiritual culture and guidance to those whom he met week by week.

His home life was beautiful, all a Christian home should be, so that his family are happily following in his steps. His last years have been somewhat lonely, his devoted wife having passed away nine years ago, and his five sons all being in New Zealand, but he bravely held on his way without a murmur.

Friends who saw him marvelled at the grace of God. He conducted family worship every night with the family who lived with him and who ministered to him in these later years. When the end came all who had known him said: “A good man was Robert Clucas.” We laid him to rest in the churchyard of Kirk Maroun amid signs of widespread sympathy. Our hearts go out in tender affection to the sons in that far-away land.

Robert was born on 2 February 1827 at Maroun, Isle of Man, to parents Thomas, a shoemaker, and Margaret.