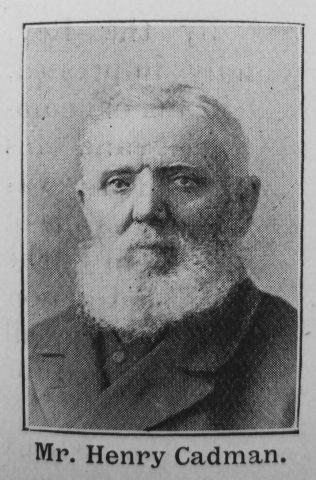 Transcription of Obituary In the Primitive Methodist Magazine by W.H. (Rev. W. Hall)

The Oakengates and Wellington Circuit has sustained a very great loss in the death of Brother Henry Cadman, of Mossy Green. He was born of pious parents in the year 1830 – was converted to God and became a member of our Church at Ketley Bank in 1851 – a position which he consistently maintained until the day of his death, which took place, July 9th, 1900. Soon after his conversion he qualified for the preacher‘s plan and became remarkable for his clear conception of Divine truth, which he invariably delivered with great taste and power. As a class leader he sought by precept and example to develop a thorough Christly spirit amongst his fellow members. The Christianity he possessed was no cunningly devised fable, but a blessed reality which gave a richness and robustness to his character and life. He served the Church at Ketley Bank as Treasurer for chapel and school for a great number of years – also as teacher of the adult class. He was very charitable towards the poor, and ever ready to help those who were in distress. As a man, a neighbour, and a Christian, he was held in great respect. During the short illness preceding his death, there were no exhibitions of rapturous joy as in the case of some, but a calm trustfulness in the finished work of Jesus Christ was maintained until he died. His funeral was largely attended by the ministers and friends of the various Nonconformist Churches in the neighbourhood — the ministers of the same taking part in the funeral ceremony in company with the Circuit Minister, the Rev. W. Hall. On Sunday evening, August 19th, a memorial sermon was preached in Ketley Bank Chapel by the Rev. W. Hall, to a large and sympathetic congregation. May we all meet him in heaven and receive the Master’s “Well done.”

Henry was baptised on 13 June 1830 at Wombridge, Shropshire. His parents were Robert, an iron miner, and Sarah.