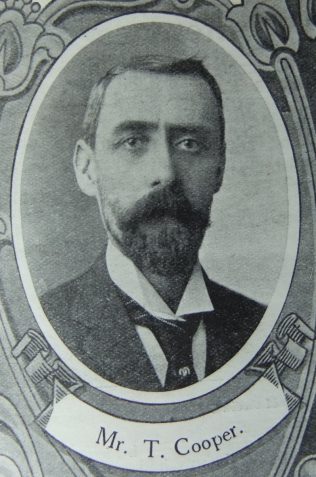 Our Barnard Castle Chancellor in his own neighbourhood is widely known and as widely esteemed.

A native of Darlington, he has for long years found a home greatly to his liking in this picturesque old town of “Barney.” He is eminently a social man, an attractive host, and a companion from whom there is always something to learn. Such small leisure as an exacting calling yields is turned to Nature, and if not “in stones,” he finds “sermons” in flowers and the lichen of the crannied wall. Long management of men and knowledge of character has given him that fine tact which is a supreme gift in a leader of men. He enjoys the perfect confidence of his brethren, is a diligent attender of the week-evening means of grace, and though not a “local,” he can speak with fluency and grace.

Thomas was born in 1858 at Darlington, Co. Durham, to parents Thomas and Alice. Thomas, senior, was a wool comber, who died when Thomas was aged about three years old. His mother married James Dobby, a wool sorter.