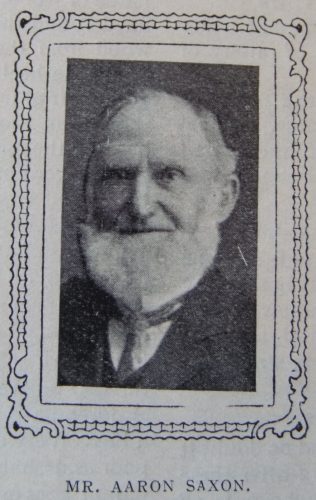 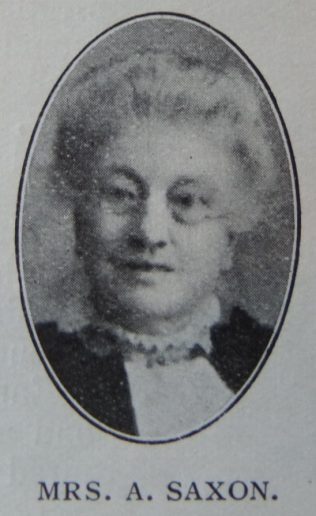 MR. SAXON hails from Lancashire. Brought up in Church circles, he was carefully instructed in the catechism and duly confirmed. When of age he removed to South Wales. Being introduced to a godly family of Primitive Methodists, he was induced to attend our services, and to give himself to Christ. Later he married into that same family, and ever since both he and his wife have been intensely devoted to our church. For over forty years Mr. Saxon has been an active worker. The Sunday school and Band of Hope early attracted him, and as Superintendent of the one and President of the other, some of his best work has been done. He is greatly beloved both by teachers and scholars. The whole of his official life has been spent at Abersychan, Pontypool Circuit, with the exception of fourteen years at Brynmawr, where he was similarly employed.

As a Trustee at Abersychan, he was greatly interested in the building of the new church, and is Treasurer of the Trust.

For several years also he has faithfully filled the position of Society steward. By his geniality and kindness he has won the hearts of all. For diligence and devotion to duty he is an example. Regular, punctual, apt and active, he makes an ideal steward. He keeps a careful watch over the Society’s funds, and as a consequence, the leaders have little trouble about deficiencies. His family is with him in school and church, and are amongst the most trusted and active, while Mrs. Saxon has for many years been looked up to as the leader of a faithful band of godly women. Time is dealing tenderly with Mr. Saxon, and he is full of activity and interested service. For him and his partner, now somewhat enfeebled, we wish a long and happy eventide.

Aaron was born abt 1840 at Warrington, Lancashire.