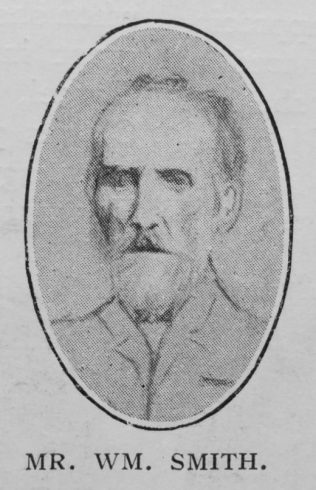 William Smith was born at Broadworth, Cumberland, in 1828, and died at Byker, Newcastle-on-Tyne Third Circuit, April 27th, 1911, aged 82 years. When a child he removed with his parents to South Shields, where he lived until a short period before his decease. His father was a local preacher, and the family were all early connected, even notably, with our Church. Our departed veteran was one of the few remaining links which, under that Divine blessing, made the Templetown and Laygate churches in South Shields so honoured in faithful service.

He was distinctly individual in character, and took great delight in prayer meetings, class meetings and mission work. His quaint, original and fervent utterances were often remarked upon. He was the life of the Sunday evening prayer meeting and the joy of preachers. His thorough goodness and simple fidelity, his faithful attendance at the services, his gentleness of spirit, and his constant yearning that souls be won for his Master, gained for him during a long and devoted life the esteem and love of all who knew him. His saintly character was a beacon light that burned with a steady flame.

Mr. J. W. Owen, of South Shields, says: “My memory goes back to more than fifty years when I gave my heart to God, and my dear friend took me to the class meeting. His prayers and his testimony were a rich experience and will ever remain with me. The noble life at eventide had its shadows when blindness came, yet he could ‘see the King in His beauty and the land that is afar off.’ “

His greatly esteemed widow and family are with us. His mortal remains rest in Heaton Cemetery.

William was born in 1828 at Broadwath, Carlisle, Cumberland. I have not been able to identify his parents in online records.

He married Mary Jane Smith (b abt1834) on 30 May 1857 at Wetheral, Cumberland. Census returns identify five children.

William died on 27 April 1911 at Byker, Newcastle upon Tyne, Northumberland.