The Member for Mow Cop 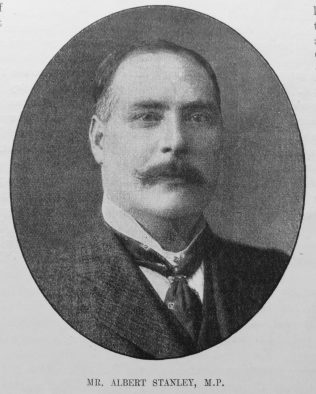 Transcription of Sketch in the Primitive Methodist Magazine by Rev. Albert A. Birchenough

It seems most fitting that the constituency I comprising such notable places of connexional historic importance as Bemersley, Norton, Harriseahead, Kidsgrove, Talke, Butt Lane, lying around the  Staffordshire side of Mow Cop, should be represented during the Centenary year by one of our own stalwart spiritual sons. Primitive Methodists throughout the kingdom have watched the election with the keenest interest. Mr. Albert Stanley, M.P., the Liberal-Labour Member, throughout his life has remained true to the Church principles of his early choice. During the contest Mr. Steadman, M.P., paid the following tribute to Mr. Stanley whom he declared to be “of sterling worth to his fellow men and above all a Christian man. In Mr. Stanley they had an ideal representative of their own class because he stood for the two highest things in life, humanity and Christianity.”

By birth Mr. Stanley is a “proud Salopian,” and was born in June, 1863, at the mining hamlet of Dark Lane. All the education that he received was of about two years’ duration, and was spent at an old Dame’s Academy and at a National school. He is however greatly indebted to a Primitive Methodist Sabbath School, where he was first taught to read, think and pray. During his youth every spare shilling was devoted to the purchase of books, and few working men possess a more choice or valuable library than he.

A Primitive Methodist of the third generation, before he was fourteen years of age he was an accredited local preacher on the Oakengates and Wellington Circuit Plan. In those early days he was widely known as “the boy preacher.” Being somewhat diminutive in stature he had to stand upon a stool, that he might be seen and heard by the crowded congregations that assembled to hear this youthful pulpit prodigy. In the seventies he removed to Cannock Chase, and identified himself with the Bloxwich and Cannock Circuit. He is one of the most popular preachers and platform speakers in the Midlands. Intensely spiritual he has a chaste vocabulary and ready delivery. He is highly respected by the sister churches for his sterling Christian character, and his high moral ideals. In his earlier manhood he was requested to become a candidate for the Ministry, but unfortunately he had to decline on account of his straitened financial resources. He has however the highest respect for the ministerial office, and sympathises with those who are grappling with village problems. Although he has been a busy man he has found time to be a representative to the District Synod and the Annual Conference. He regards these appointments as amongst the highest honours of his church-life.

Mr. Stanley is not ashamed to acknowledge that he is the son of a miner. Since he was eleven years of age he has earned his own living, and he has passed through every grade of work in a coal-pit. In addressing his fellow-miners assembled beneath the shadow of “the old man of Mow” he declared that he himself “had tasted the subterranean depths of human experience and knew the hardships of the eternal struggle to make two ends meet.” He knows the dangers to which miners are exposed. During his teens he had two accidents which resulted in a broken arm and a dislocated knee. When he was twenty he was the victim of a third mishap, and for six long months he lay in a precarious condition in the hospital.

At the early age of fifteen, Mr. Stanley was the energetic secretary of a Juvenile Liberal Association. In 1884 and when he was only twenty-one, he became agent of the Cannock Chase Miners’ Association. Six years later he was elected secretary of the Midland Miners’ Federation, which embraces Staffordshire, Warwickshire, Shropshire and Worcestershire. Through his exertions, unhappy strikes have been avoided, and the social and financial conditions of the miners have been considerably improved. For seventeen years Mr. Stanley has been a prominent member of the Staffordshire County Council, and it is proverbial that if the members wish to adopt a contentious measure they request a Lord to propose and Albert Stanley to second. Within the last twelve months Mr. Stanley has been made a magistrate for the Stafford County.

Before accepting the candidature of North West Staffordshire he had previously declined to be nominated for Wellington, his native constituency, and also for Stoke-on-Trent and Wednesbury divisions. Mr. Stanley’s political programme is of a definitive, progressive character. Respecting national education he is sound to the core. Remembering his own disadvantages he allies himself with the policy of Free Churchmen. He is a strong believer in old age pensions, which he has fearlessly advocated in the County Council. Mr. Stanley hopes to see the day when the old soldiers of industry, instead of being relegated to the human scrap-heap or the “Big House,” would have at little more cost a cot of their own where they could end their days in peace and quiet. Free Trade he holds as one of his cherished political principles. He is strongly of opinion that Tariff Reform is only another name for Protection, which would greatly increase the cost of living amongst the working-classes, and would enable the rich capitalist to have a larger “corner” in which they could more readily make their fortunes. These conclusions are confirmed by his practical knowledge of the conditions of labour in Germany, and by his repeated visits to the Continent. He is a strong advocate of the better housing of the working classes, the Limitation of the Veto of the House of Lords, the Miners’ Eight Hours Bill and for all reforms that are aiming at the moral and social advancement of the people.

Albert was baptised on 6 July 1862 at Dawley Magna, Shropshire. His parents were Richard, coal miner, and Martha.

He was first elected M.P. in 1907 as a Liberal-Labour politician. In the 1910 election he sought re-election, successfully, as a labour Party candidate.

Albert died on 17 December 1915 at St Andrew’s Hospital, Northampton, whilst still an M.P.