From a series entitled 'Saintly Women of Methodism' published in the Christian Messenger, 1902 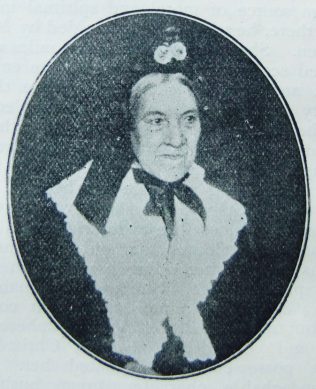 Transcription of Sketch in the Christian Messenger by Henry Carden

Of the sainted womanhood of our Church volumes of interesting and inspiring biography might be written. Some notable women have lived and served our Church in village Societies whose influence has penetrated far beyond the locality in which they were known, and has entered as an ever-increasing force into the larger sphere of our Connexional service.

Of the many such workers known, and unknown, we have selected one whose memory deserves the best that pen can write concerning her.

For some fifty years our Church in the picturesque and far-famed village of Milton notoriety had connected with it one of the most notable women of our Primitive Methodist fellowship and work. She was known at first by the name of Mrs. Carden, and was proudly claimed as mother by the Rev. Henry Carden. For the last twenty-nine years of her life she was known as Mrs. Stacey. Should the history of our work in Chalfont St. Giles be written, no person will have a higher place of honour than she.

When she passed away, at the age of 75 years, our Church lost one who had been most devoted to its interests, both spiritual and financial, and the village lost one of the most valuable lives that had ever breathed its salubrious air and gazed upon its enchanting scenery – for her life had been practically lived for others. By her removal our Church lost one who had been indeed “a Mother in Israel ”; ah, more, for hers had been a place of influence and power in our Church-life usually held by the stronger sex.

Her marriage with the late Mr. Samuel Carden, who was one of the first fruits of our mission work in the village, and became one of our first local preachers in the neighbourhood, was the occasion of her union with our Church. A notable instance of Providence may be mentioned in this connection.

On the day Chalfont St. Giles received the first visit of Primitive Methodist preachers—the late Brothers Joseph and Thomas Pierce, of High Wycombe, being the men who first visited the place as the representatives of our Church, walking ten miles to get to the village – amongst those who listened to them in the open air was the mother of the late Mr. Samuel Carden, and she ventured to ask them if they would go to her house and have a cup of tea, which invitation they gratefully accepted. That cup of tea has not failed to realise a rich reward, for that woman’s son became one of the first young men in the village who was made a Local Preacher, and his son and his son’s son are both ministers of our Church.

The subject of our sketch was only permitted to enjoy this happy union for 14 years; she was then left in the desolation of widowhood, and had to become both father and mother to her two boys, and never did a woman fill that post more worthily. It was during the years of her widowhood that she more fully developed her powers for service in the Church and for those outside. When the Rev. Emmanuel Masterman gave himself so earnestly to the development of the work, both at Chalfont and in the surrounding villages, she was his “right hand.” When he undertook the task of erecting the beautiful “Milton Memorial Chapel,” which is not only an ornament to the village, but a benign source of moral and spiritual influence there, he was splendidly aided by Mrs. Carden. She journeyed scores of miles and begged scores of pounds toward the enterprise, and from that time, for more than twenty years, she was a perpetual collector for the cause, and no year passed without pounds coming to the funds of the Circuit through her efforts.

By her second marriage she became the wife of Mr. Stacey, but she never allowed the tax of business life to interfere with the claims of the Church, nor did her Church claims prevent her doing her duty in her new sphere of life. She was a woman of strong character; a personality that could not but make itself felt in any sphere of life, and yet, withal, a quiet, Christ-like spirit possessed and animated her. Of unimpeachable character, great business capacity, whole-hearted devotion to Christ and to the interests of others – by no means a sentimental Christian – she was one of the best expositions of a fully sanctified life the Church has ever produced. Her life was “fruitful in every good work.”

When physical infirmities, the result of self-forgetfulness in the interests of others and the Church, kept her a prisoner in the home, there was no lagging of interest in the Church’s welfare. The lavish hospitality of their home was continuously at the disposal of the ministers and lay preachers alike. The ministers enjoyed her fellowship, and were indebted to her helpfulness to the very last. She had ever been the ministers’ friend. In this Circuit of villages the financial struggle has always been very great, and many pounds had come to the Circuit fund through her begging letters.

On more than one occasion, when, articles have been urgently needed in the preacher’s house, and the Circuit has had no funds, she has ordered what has been required, having the goods placed to her own account till she could beg the money to pay for them.

Such acts as these, and others of an equally generous nature, could not but endear her to the parties concerned. She was for years an attendant at the annual gathering of the “Friends” at Jordan’s meeting-house, and the visitors accustomed to attend these gatherings, not only became familiar with her form, but with her collecting book.

She had a list of persons in adjacent towns on whom she called annually for subscriptions for our village work, and as long, as she was able to go, her husband would drive her on these rounds, and when she could no longer pay these annual calls she sent through the post, and much help came in response to these appeals. It was while she was a prisoner in the house, and during the last year of her life, that under the wise and energetic superintendency of the Rev. E.J.T. Bagnall, it was determined to purchase the attractive house on the hillside near the chapel for a minister’s residence, which was an improvement on the former conditions of the ill-positioned four-roomed cottage. No one came to see Mrs. Stacey during the closing months of her affliction, nor even on her dying bed, without being appealed to on behalf of the minister’s house. In more than one instance persons were sent for to her sick-room, at her request, with a view to this. She showed the keenest interest in the work of the Church and the comfort of others to the very last. Her interest was by no means local alone; for many years she was a regular subscriber to our Missionary Fund. She did much to serve our Church by her interest in financial matters, but yet more by her sterling Christian character and spiritual service.

Many a sick-room in the village had been the scene of her ministrations, and many who passed through her Sunday School class will ever be grateful for her instruction, influence, and kindly interest; but by no living soul is the value of her life more gratefully recognised than by him, whose consecration to the Ministry of the Church she so much loved, gave to her life its chief joy.

Mary was baptised on 12 May 1822 at Rickmansworth, Hertfordshire. Her parents were Joseph Atkins Kirby, a brick and tile maker, and Ann Barnes.

Mary married James Stacey (abt 1824-1902) in late 1868 in the Wycombe Registration District, Buckinghamshire. James as a baker and brewer.

Mary died in the spring of 1897 at Chalfont St Giles, Buckinghamshire.