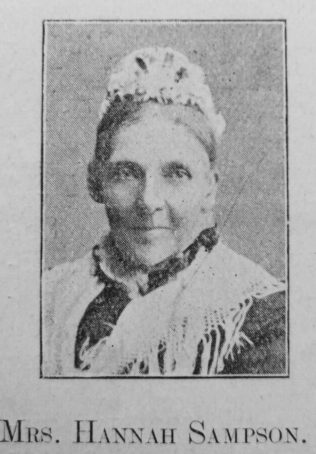 Transcription of Obituary in the Primitive Methodist Magazine by G.P. Maynard

Mrs. Hannah Sampson, of the Essex Street Church, in Bristol Second Circuit, passed to her eternal rest on November 18th, 1903, at the ripe age of 72 years, and was laid to rest in Arno’s Vale Cemetery, in the grave where her husband was buried seventeen years ago, after a very impressive service in Essex Street Chapel conducted by Rev. G. Percy Maynard. A memorial service held in the same place on November 29th, was the occasion of a remarkable demonstration of very high regard for the deceased lady, and of real sorrow for her loss and deep sympathy with her family. She was well known in South Bristol for her charitable spirit and unceasing, but quiet, efforts to relieve distress and make life easier and brighter for the poor. She probably did far more than ever those nearest to her knew, for she did much good secretly, and almost, by stealth. Her attachment to the church of her choice was very close and ardent. She was brought up in connection with the Established Church, but from youth was a devoted Primitive Methodist. She led her (then future) husband into our ranks, in which he and his sons have been for more than a generation so conspicuously useful. She loved the services of the sanctuary. Hymns and prayers and preaching seemed to give her inspiration to live and toil and suffer with patience and courage. Withal, the sphere in which she shone most brightly was the home. Her strength was lavished upon her family. Each son and daughter was carefully taught and trained to be honest and industrious, and, above all, God-fearing and God-serving. They have risen up to call her blessed. Her works do follow her. She suffered much, and sometimes longed for home. All that loving thought could devise or skill could execute was provided by the son and daughter-in-law who nursed her tenderly. And she was very grateful to them and to God. And now she has gone to re-join the husband whom she never ceased to mourn, in the presence of the Lord where, in Histime, we trust to see her again.

Hannah was baptised on 17 July 1831 at Bristol, Gloucestershire. Her parents were Samuel and Sarah. Samuel died before Hannah was ten years old and her mother married Arundel Pryor, an engineer (1841).