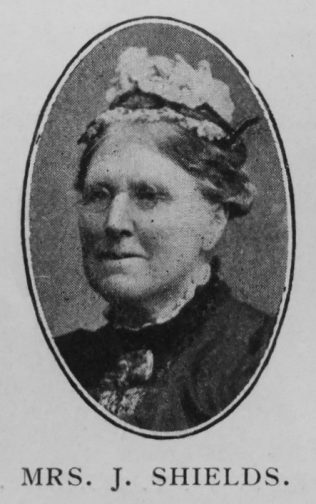 Mrs. John Shields, one of the first members of St. John’s Road Society, was converted fifty-five years ago, and, first at St. Sepulchre Street Society, then at St. John’s Road Church, has belonged to this circuit all the time. She soon showed considerable ability as a speaker, and was in great demand at temperance meetings, and during her early womanhood few wielded a greater influence for the cause of temperance in the neighbourhood.

As a Christian worker she was ever ready to take her full share, and in connection with the Sisters’ Meeting, conducted by Mrs. M.H. Fell, her interest and service was unstintingly given, and on the last day amongst us she sent her shilling towards a tea provided by the class. She was a kindly, motherly soul, to whom those in trouble turned for counsel and help. She lived her religion, and honoured her Lord by consistency and devotion.

For several years she has been a great sufferer, but her afflictions have been borne with great fortitude and resignation. She passed into “the fuller life” on Thursday, April 18th. Rev. G. Hind conducted the funeral service on Monday, April 22nd, amid many tokens of grief and sympathy for the aged husband and the family. He fittingly spoke of the great loss the Church had sustained by our sister’s departure, and said that during the last two or three years about twenty officials and workers had passed away from St. John’s Road.