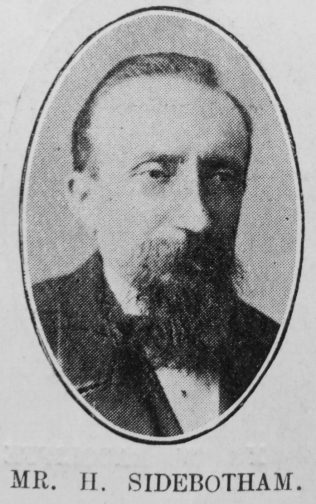 Transcription of Obituary published in the Primitive Methodist Magazine by B.M.

The late Mr. Henry Sidebotham passed away at Port St. Mary, I.0.M., on Friday, February 19th, 1909. Though in feeble health, the end was somewhat unexpected. Our brother will be best remembered as a fine example of a Christian man of business. At the age of twelve he lost his eyesight, but notwithstanding this physical deprivation he built up a flourishing business. His faculty for finance amounted almost to genius, and both money and ability were freely placed at the service of his Church. He is described as an ideal Treasurer and Circuit Steward, stimulating by his own example the liberality of others.

His great work was in connection with the Higher Ardwick Circuit and Church. He was connected with the old Ogden Street Chapel, which was superseded by the present premises. Higher Ardwick Church has been described as the cathedral of Primitive Methodism, and with the financial efforts occasioned by its building our late brother had much to do. He was most fertile of suggestion, and, besides giving a personal donation of £500, was always to the fore in initiating or helping forward the lesser financial schemes. Besides his princely contributions to Ardwick Church, he was most lavish in his gifts to other struggling causes and to Christian people in need of financial help.

For reasons of health his last years were spent at Heaton Chapel, where he associated himself with the Stockport Second Circuit, which he represented on the District Committee. He also served on the College Committee. Even in his retirement he took a great interest in Connexional matters and was a liberal supporter of Connexional funds. To the last he showed himself alert to all current problems and specially interested in all questions of theological or religious debate. He was most happy in his marriage relations, and in his home life the grace of hospitality was always exercised. He was also a man of deep and fervent spirituality. Since his passing, many old comrades have borne touching testimony to his service and his worth.

Henry was born abt1841 at Manchester, Lancashire, to parents Samuel, a provision dealer, and Ann.

He married Mary Ann Slater (abt1853-1930) in the summer of 1898 in the Stockport Registration District, Cheshire. Alice and Mary Ann were sisters.