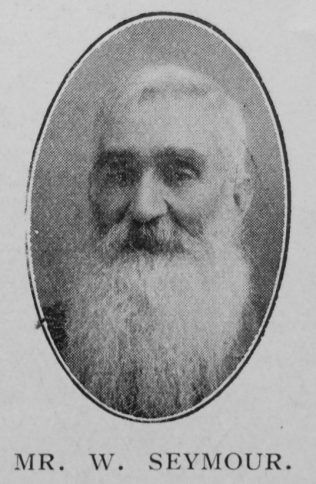 Transcription of obituary published in the Primitive Methodist Magazine by W.H.T.

Mr. William Seymour was born at Hutton Rudby, Yorks, in 1830, and finished his earthly labours at Manchester, September 14th, 1912. He was converted while in his teens, and for over sixty years as teacher, local preacher and class leader rendered yeoman service to our Church.

Coming as a young man to South Bank, Middlesboro’, he entered heartily into the life of the Church and the District. “Northern Primitive Methodism” refers to him. He travelled far, preached successfully and witnessed many conversions as the result of his ministry. He took keen interest in the District Committee work, and was several times elected to the annual Synod and the Conference.

The public life of the town received his ungrudging devotion, as witnessed by the fact that for many years he served as a Guardian, County Councillor, and Chairman of the Urban Council. For over sixty years he was an ardent temperance advocate. He was passionately interested in our Connexional literature and in our African Missions; greatly honoured at South Bank where he was a prominent leader for fifty years, and at Upper Moss Lane, Manchester, where he spent the last six years, he quietly fell asleep after a peaceful eventide and brief illness.

He married Mary Harrison (1831-1894) in the spring of 1853 in the Stockton Registration District, Co. Durham. Census returns identify ten children.

He married Eliza Pattison, nee Rudge (1856-1906) in the summer of 1895 in the Middlesborough Registration District, Yorkshire. They brought up one daughter, born to Eliza before their marriage.