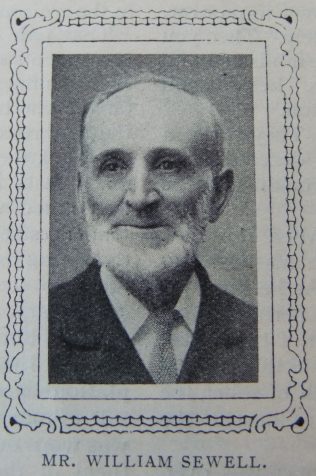 MR.WILLIAM SEWELL, of High Street Church, Scunthorpe Circuit, was born at Barnetty, Lincs., in 1839. He was converted in 1870 and has been connected with our Church for forty years, and for thirty-six years has successfully and honourably filled the office of Class leader, in which he has found the chief joy of his life. He is one of the most successful Class leaders in Primitive

Methodism and it is always an inspiration to be present at his Class meeting. He resorts to no “new methods” and needs no “Bible Readings” and other expedients, but heartily believes and thoroughly practises the “old way ” of Christian fellowship, experience and testimony. Like “Daniel Quarm” he believes in people “talking plenty about Jesus Christ and Religion,” and his members soon catch the inspiration and feel it good to be present. At one time, before our new Church was opened, his members numbered well over one-hundred and to-day his Class membership is seventy-two and is most successfully conducted. Bro. Sewell is one of the spiritual stalwarts of our Church and his worth and service entitle him to a place of honour and distinction. He believes that the development and real prosperity of our Church largely depends upon the vigorous maintenance of the Class meeting and the enthusiastic devotion of the Class leader to his duties, and this belief put into practice is the secret of his success. His state of health has necessitated the slackening somewhat of the strain of service, but our friend is ably seconded by his devoted assistant – Mr. A. Taylor – a brother of kindred spirit and belief, and the Class continues to maintain its high standard of power and usefulness. May our brother continue long in loyal and devoted service.

William was born in 1839 at Barnetby-le-Wold, Lincolnshire, to parents Charles and Elizabeth. Charles was a bricklayer.

His obituary records that William was class-leader for 45 years and a local preacher for forty years.

William married Maria Pickersgill, nee Sinderson (abt 1835-1896) in the spring of 1891 at Scunthorpe, Lincolnshire.