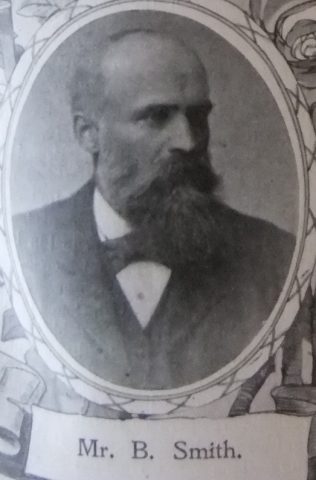 Mr. B. Smith was born at Hovingham, near Malton, in 1849. For over fifteen years he has been Circuit Steward of Hull II, and has rendered excellent service as School Superintendent and Local preacher. He came to Hull in 1875, and joined our church when seventeen years of age. For two years he attended our Bourne Chapel and then moved to Clowes Chapel. Our friend’s family life has been most happy. One son has been given to our ministry, another is a Local Preacher, and the rest of the sons and daughters of this large family are in close touch with the worship and work of our Church. During recent years Mr. Smith’s business and religious activities have been curtailed by impaired health, but the last few months have witnessed a marked improvement and he is getting back to his old form. With his deep sympathy with the Church, his spontaneous and constant generosity, his intelligent and fervent piety he is a most admirable Chancellor.

Benjamin was born in 1849 to parents Thomas and Jane Esther. Thomas worked the land.

Benjamin operated a wholesale grocery business after moving to Hull.

Benjamin died on 19 October 1920 at York, Yorkshire (corrected as below). Follow this link to view his gravestone.