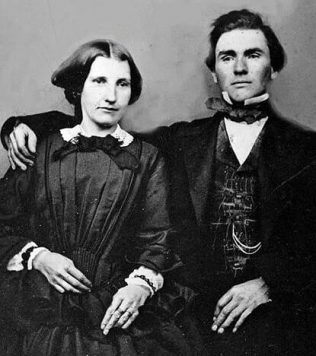 Ferdinand Spoor, founder of one of several pits working under the name of Coppy Crooks Colliery near Shildon County Durham. He was born at Newcastle upon Tyne in 1825, to Thomas Spoor and Dorothy Hutchinson. The lady with him is Annie Taylorson Scarth of Houghton-le-Spring, whom he married at Newcastle on February 2, 1850. A year later the newly-wed couple are recorded at Escomb with their first child, Thomas Jackson Spoor, born there in that year. Ferdinand is stated as being a grocer, which he is a decade later, but also in the possession of 30 acres of land.

In March 1866 Annie, Ferdinand’s wife of 16 years, passes away at the age of forty. Four years later in September 1870, Ferdinand marries Laura Nichol of Penryn, Cornwall. In 1881 he is classed as a retired grocer at age 53 and by 1891 his occupation is that of colliery owner. He would end his days at Woodside near Escomb in 1894 aged 67. Second wife Laura would answer unto God at Wandsworth, London, in 1910 aged 78.

The following is text from an archive newspaper which exemplifies the generosity of Mr Ferdinand Spoor:

Generous donation to the needy, April 1892
Mr F. Spoor, of Woodside, who owns a small landsdale pit between Shildon and Fylands Bridge, gives to the people of Fylands Bridge a cart-load of coal three times a week, and leads it to them. Some poor people who cannot buy any for want of money have gone to him and have got their wants supplied without money and without price. I think this is showing a noble example to our large coal owners. Mr Spoor acts on the golden rule, “Doing as he would like to be done by.”