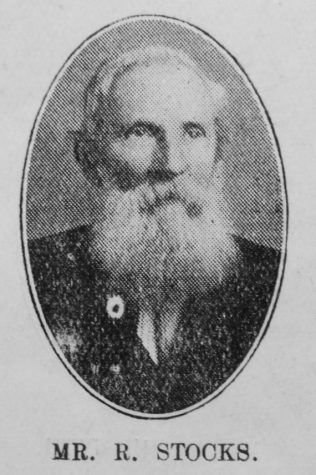 Transcription of Obituary published in the Primitive Methodist Magazine by F.E.T

With Quarry Hill Church, Leeds First Circuit, Mr. Richard Stocks was closely associated for nearly sixty years, and at the time of his death was the oldest member.

Mr. Stocks was born at Oldham, March 17th, 1826, and when translated from earth to heaven on March 10th, 1909, was almost eighty-three years of age. Coming to Leeds as a boy, he was brought up by his grandfather, and served an apprenticeship as a brass moulder. He was with two firms only during the whole of his career, in the second of which he ultimately became master.

In 1848 he married Miss Ann Tipling, with whom he lived a long and happy married life until she was “called higher” on October 29th, 1907. Shortly after marriage Mr. and Mrs. Stocks joined Quarry Hill Society, and maintained an unbroken membership until death.

Mr. Stocks was a class leader and a trustee about forty years, both of which positions he held at the time of his death. He held the position of chapel treasurer for thirty years, and for nearly the same length of time was a Sunday School teacher and had held the office of superintendent.

For a number of years he regularly held a children’s Sunday evening service, the results of which are seen in members and officials of the church to day.

In 1879 Mr. and Mrs. Stocks went to reside at Moortown, about six miles from Leeds, but their interest in Quarry Hill Church continued unabated to the end, and less than three weeks before his death Mr. Stocks attended service there.

Our brother was of a peaceable disposition, a generous supporter, and has left a splendid record of faithful service. A man of faith, he believed in Divine guidance.

Amid every token of esteem his remains were laid to rest in Shadwell Churchyard on March 13th, 1909.

On Sunday evening, April 4th, in Quarry Hill Chapel, a memorial service was held, when the preacher was the Rev. F.E. Thistlethwaite, superintendent minister.

Note: All the census returns for Richard identify his birthplace as Leeds.