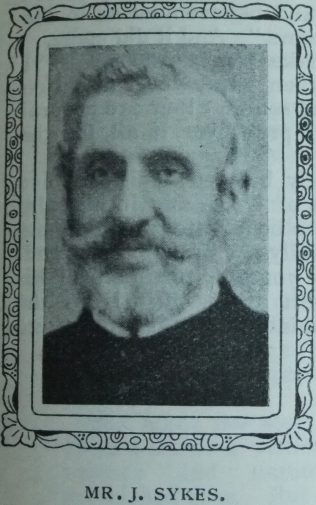 In a Lincolnshire village, by the name Conisholme, our brother was born in the year 1846. At the age of nineteen years he found his way to Hull, an orphan, seeking his place in life’s maze and mart. For a time the course of things seemed against him. But he found his way to our Holborn Street Chapel, and their sought and found Jesus as his Saviour and Lord. From that time his pathway became more certain and more hopeful. He became a member of the first class formed in connection with our Holderness Road Church, and through all these years he has remained faithful, and to-day he “hath good report of all men” in this church. To him Holderness Road is “the palace beautiful,” the “joy of the whole earth.”

Soon after conversion he began working in the Sunday school. In the year 1871 a class-book was given to him, and he was told to raise a new class. This he did, and to this day has continued a wise and helpful class-leader. In the same year Parkinson Milson encouraged him to exercise his gifts as a local preacher. His efforts proved very successful, and during the subsequent years he has loyally served the church in that capacity. With a mind familiar with the Bible and with the best hymns, and with a heart full of love to God and to suffering, sinful men, his pulpit efforts are always acceptable and profitable. For twenty-five years he was in the employ of the late Henry Hodge, and during the time came into contact with a goodly number of our ministers, and their fellowship he greatly prized. Two of his sons are officials in the Circuit. May his life be spared to the Church for years, and then may he be granted an “abundant entrance” into the “temple not made with hands.”

Joseph was born in 1846 at Conisholme, Lincolnshire, to parents James and Mary. James worked the land and Mary was a schoolmistress.