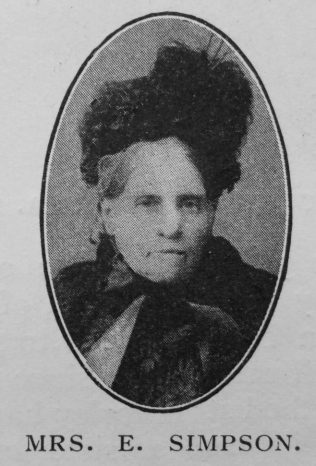 Transcription of obituary published in the Primitive Methodist Magazine by Philip J. Fisher

Mrs. Emma Simpson (née Cowap), who has recently passed from us into more abundant life, was a fine type of Christian womanhood. Born at Tiverton, Cheshire, on November 21st, 1833, she spent her whole life fragrantly and usefully in the neighbourhood. She became a member of the Wesleyan communion in December, 1855. She married a stalwart Primitive in Mr. C.F. Simpson, who predeceased her in 1897, and their Christian hospitality soon became a proverb.

Our own chapel at Tiverton was not built till 1864, but for some time previously Tiverton Hall — Mr. and Mrs.Simpson’s home — had been a “preaching house” for us. When the chapel was erected, Mrs. Simpson became a whole-hearted helper, and worked consistently and enthusiastically for the Church until the end, though she does not appear to have transferred her membership to us until 1875.

Many preachers, lay and ministerial, have testified to her bountiful hospitality and motherly care, while she was deeply respected by the whole countryside as a mother to her people. For many years it has been a recognised thing that the Missionary deputation is entertained at Tiverton Hall, and Mrs. Simpson’s enduring interest in and work for the Missionary Cause has been commemorated in our Herald. She held a Missionary box from 1867, and added over £260 to the Missionary Funds.

The call came for her with a suddenness, yet tranquillity, fitting to her placid faith, on December 4th, 1910. On December 8th her body was carried to Tiverton Chapel for the last time, thence to interment in the family vault in Tarporley Churchyard, the writer conducting the service. Her descendants will treasure her memory. They sorrow not as they that are without hope, having read the plain testimony of the life they knew. A memorial service was conducted by the writer.

Emma was born on 21 November 1833 at Tiverton, Cheshire, to parents William Butler Cowap, an auctioneer (1841), and Mary Large. She was baptised on 13 December 1833 at Bunbury, Cheshire.