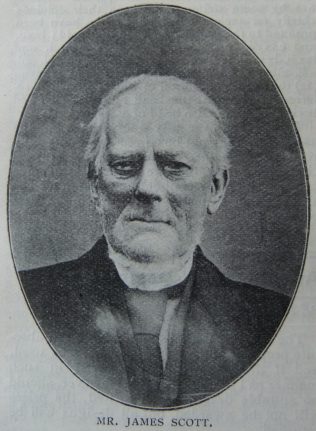 JAMES SCOTT was born in a village called Briestfield, in the West Riding of Yorkshire. His father was left homeless at the age of seven years, by which time he was in the mill. An old women took pity on the poor lad and agreed to lodge him and cook his food for 4d. per week, he having to purchase the food. He had no schooling, hence he could not read, and  as one who knew the want of it, he took great care that his family should have greater advantages. So James enjoyed the privilege of attending a school three miles away, for which his father paid 1s.8d. per fortnight; but at the age of ten years he was placed in the woollen mill, where he worked from six a.m. to eight p.m. for 2s. 9d. per week, and so began the oft-repeated story of struggle.

When just over twenty-one years of age, during a revival in the Wakefield Circuit, he decided for Christ. Then followed quickly appointments such as Sunday-school Teacher (which he held till seventy-five years of age) Class Leader, and such he still is; Local Preacher, and for over sixty years he has been on the plan. With some amount of pride he says: “I never sent an appointment in to a steward in my life. I never missed an appointment except one, and that by oversight.” Wakefield Circuit was a wide one in those days, embracing Normanton, Ossett, and Horbury Circuits and Grange Moor, but many years ago he moved to Heckmondwike Circuit and has been a Trustee of that chapel for nearly forty years.

He has also come in for a fair share of confidence outside of the Church, but the only office which he now retains is that of Secretary for an important Sick Benefit Society, which post he has held forty years. As delegate to District Meeting he has often served, and once he represented his district in Conference at Northampton.

Our brother is a thorough Liberal in politics, and we are surprised that the man of eighty-four could take such a living interest as he did in the late election. But then it was the question upon which it was fought that fired him. He painfully remembered the bad old times of taxed food.

They were not encouraged in his younger days to much reading – Connexional Magazines, Bible, and Hymn-book were enough. Still he added to his stock of books “Matthew Henry,” and his library was then complete. About twenty-four years ago the great sorrow of his life came when his devoted wife was taken from his side. But he is very fortunate in his present wife, who is a Class Leader and a good Christian worker in our Kilpinhill Society in the Batley Circuit.

He is a typical Yorkshireman, outspoken almost to the point of bluntness and easily misunderstood, but fair-minded withal. He has a well balanced brain, strong mental powers, the half of which have never been discovered, deep spiritual fervour, and what he might have been under more favourable conditions we cannot surmise.

We are told that in his younger days he was often misjudged, and as an official much feared. At this we do not wonder because a manhood panting for enlargement yet beating against cramped conditions which were too strong for him to break through, would be sure to beget within him moods which were not the most desirable, But that was as much his misfortune as his fault.

Our old friend’s tall, brawny form, is bending beneath the weight of his eighty-four years and resultant infirmities, and in the natural order of things his stay with us cannot be much extended. Indeed we think we see in him signs of that mellowing so characteristic when the feet are almost pressing the threshold of the eternal world.

We wish for him a sweet, calm sunset, the afterglow of which may be a benediction to those he leaves behind.

James was baptised on 3 March 1822 at St. Michael and All Angels, Thornhill, Yorkshire. His parents were John, a clothier, and Hannah.

Census returns give the following occupations for James.

James died in the summer of 1913 at Dewsbury, Yorkshire.