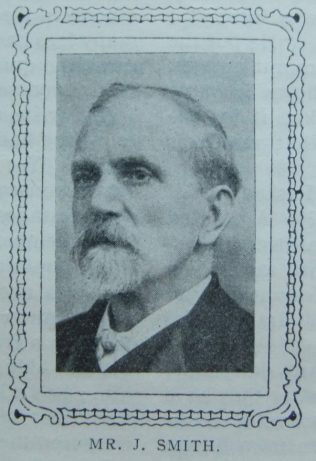 FORTY-ONE years ago the subject of this sketch and Miss Kenrick became husband and wife, and at the same time united themselves to the Whitley Street Primitive Methodist Church, West Hartlepool. Three years later Providence directed them to Tyneside, and for thirty-eight years they have been loyal and useful members of our Ellisore Street Church, Jarrow.

During the early years of his life Mr. Smith took an active interest in the Sunday school, serving it as Librarian, Secretary, Treasurer and Superintendent. In later years the church has claimed his energies and time. The Trustees, for thirty-one years in succession, have elected him to be their Steward; the Society has called him again and again to the Assistant Stewardship, and for the last two years he has filled the premier place.

Mr. Smith does not pretend to be Steward – he is one. The office, to him, carries with it responsibility and opportunity; he never shirks the one, nor neglects to avail himself of the other. The work assigned him is done thoroughly. His soul is in the concern. The church he loves and serves is loved and served by his wife, daughters and sons; they are all in the front rank of service, willingly offering and cheerfully giving their best. The welcome to their hospitable home is one that is felt, and not a few preachers have pleasant memories of their visits to Ingleside. It is Society Stewards of the pattern of Mr. Smith, and families like his that make some of us proud of and grateful for the Primitive Methodist Church. These are they who give us hope for the to-morrow of the Church, and these are they who freely admit that it is to the Church they owe the best things.

James was born in 1849 at Liverpool, Lancashire, to parents William and Jane. In 1851, William was a master spirit dealer in Edinburgh. Later he moved to Northumberland and was a cabinetmaker.

James was baptised on 1 July 1849 at St Peters, Liverpool, Lancashire.

When he moved to Jarrow, James worked as a shipyard plater.

James married Mary Ann Renwick (not Kenrick) (abt1852-1938) in the spring of 1871 at Newcastle upon Tyne, Northumberland. Census returns identify six of seven children.

James died in the third quarter of 1921 at Jarrow, Co. Durham.