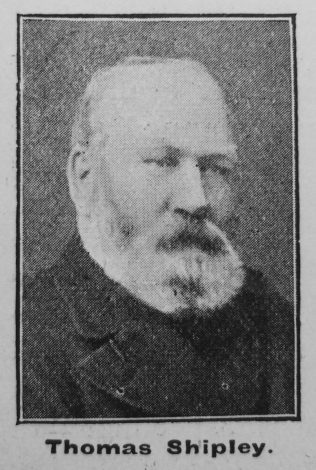 Transcription of Obituary in the Primitive Methodist Magazine by John E. Leuty

There passed away to the Home of the Blest, on Sunday afternoon, June 1st, 1902, the spirit of Thos. Shipley, of Durham. He had been ailing for the past twelve months, but it was not thought that the end was so near until early on the Sabbath morning, whens a sudden change occurred which betokened the demise. On Saturday evening, May 31st, he was sitting up in bed talking cheerfully to the writer, and showing the deepest interest in matters affecting the welfare of the circuit, but he has gone, and a wide circle of friends mourn his loss. Bro. Shipley was born at Lumley, county Durham, and was brought to God in early life. He joined our Church at once, and remained a staunch and consistent member to the day of his death – a period of nearly sixty years. For 55 years his name has appeared upon the Durham Circuit Plan, being “on trial” in the days of Revs. W. Lister and John Snowden. The station then embraced the present Spennymoor and Thornley circuits (Thornley was divided into three last year) covering a wide area and necessitating long journeys and arduous toil. Bro Shipley cheerfully took his share of appointments, and did much to build up the churches. During his long connection with us he has held many offices in the Church, being Trustee for several chapels and Circuit Steward for a considerable period. He was a Sunday school Worker for many years, and a class leader at the time of his decease. Several times he has been sent as delegate to District Meeting, and once represented the distinct at Conference. In his early days he was a Chartist, and always a true Liberal, strenuous in the advocacy of his principles. The Durham Tory paper declares that he was an ardent Radical, and that his voice has often been heard on North of England platforms. Very early he took up the temperance cause, and fought valiantly when opposition was rampant. The writer has heard him say that he owed his long and healthy life to temperance. When a young man he migrated from Lumley to Durham, and commenced business in the grocery line, and for upwards of 50 years carried on a successful business. His home was ever open to our preachers, travelling and lay, and many can testify to his abundant generosity. Truly a good man in Israel has fallen. In regard to every good work he was ever ready when wanted. His interest in the welfare of the Connexion extended over half a century and never waned. For many years he took the chair at our annual missionary meeting, and was a liberal supporter of the Society, as the annual reports show. To speak of all his kind acts would fill a small volume. As a father he was considerate and affectionate, always seeking the highest good of his children. As a husband he was loving and kind, filling the home with sunshine and benediction. Mr. Shipley was twice married, his second wife surviving him, mourning deeply her loss. He also leaves behind two daughters – Mrs. Reed and Mrs. Church – and one son, Mr. George Shipley, of Shincliffe. Mr. Church, his son-in-law, succeeded to the grocery business two years ago at Dragon Villa. The interment took place on Wednesday, June 4th, in the Belmont Churchyard.

I have not been able to determine the parents of Thomas.