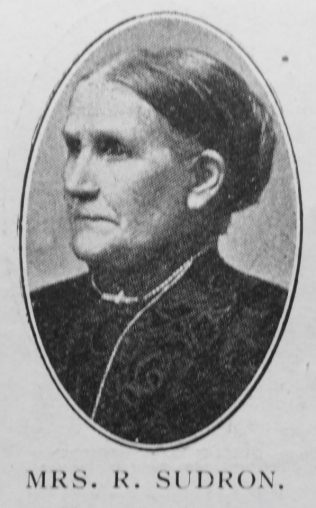 Transcription of obituary published in the Primitive Methodist Magazine by George J. Lane

On the morning of Nov. 14th, 1909, Rachel Sudron entered into rest. Born at Stockton-on-Tees in 1841, she married Mr. Thomas Sudron in 1865. For over 40 years our sister was a Christian worker, and though her attachment to the Primitive Methodists began late in life, for 15 years no life-long Primitive Methodist loved the Church more devotedly than she. If Redcar Church was prosperous, everything else was relatively unimportant.

She saw to it that her nine children were always ready for Sunday School with her husband. In later life, when her children had grown up, she invariably attended morning and evening service. In the home she was a self-sacrificing and model mother; as a friend, constant and faithful. She was unostentatious, deeply religious, and of strong convictions. Fond of the services of the Church, she knew the value of a good sermon.

She suffered intensely towards the last, but clung to the Great Physician. On her  death-bed she appealed to her children to follow Christ and meet her in Heaven. The funeral service, largely attended, was conducted by our minister in our Redcar Church. Many letters from friends testify to the esteem in which our sister was held. On the Sunday night following, the Rev. G.J. Lane conducted a most impressive memorial service in our church, preaching on “David serving his generation by the will of God and fell asleep.”

Rachel was born in 1841 at Stockton on Tees, Co. Durham, to parents Edward Coates, a ship carpenter (1861), and Hannah Thomas.