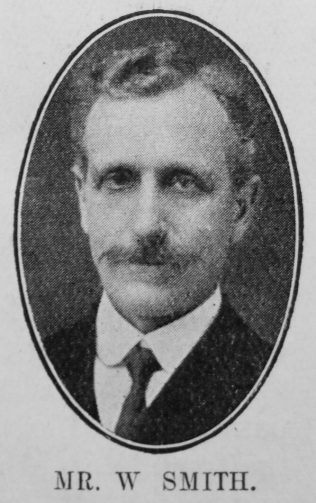 MR. WILLIAM SMITH, of Barnes, Richmond Circuit, who died February 8th, 1909, aged forty-four, was converted at Acton thirty years ago. He early became a local preacher and as a railway signalman resided successively at Hampton Hill, Brentford, and Barnes, rendering valuable service to our church at each. When the Society was formed at Barnes he was appointed class leader and then trustee, diligently fulfilling the duties of trustee secretary. His fellow-workmen recognised his character and ability by electing him on the Railway Conciliation Board and later to the chairmanship of the Board. In connection with these duties he took a chill. Pneumonia supervened and he quietly passed away after a few days’ illness.

One hundred and twenty railway men from all parts of the South Western system attended his funeral, a striking testimony to the appreciation of a good man. His widow and sons are valued workers with us. In the varied relationships of life, as husband, father, friend, our brother left behind influences for good that will endure; and as a worker in the church, his diligence and promptitude and high ideals of service, made him an example to his fellows. He appeared to have many years of useful toil before him but God has ordered it otherwise, and we humbly bow to the Divine will.