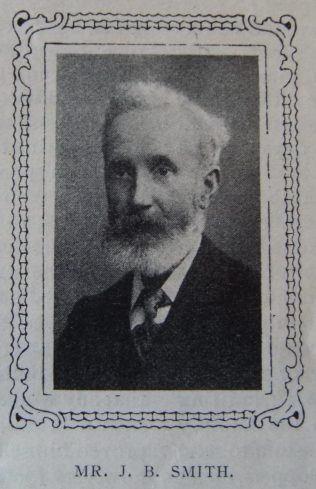 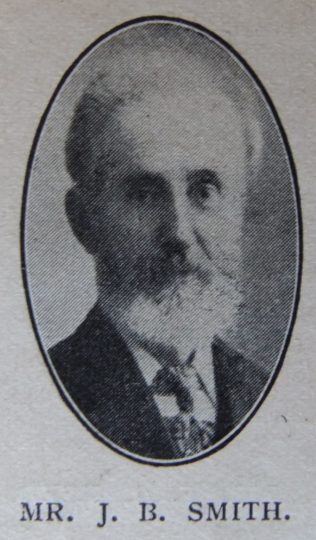 MR. J.B. SMITH, the Society steward of lrwell Vale, Bury Circuit, is a Scotsman, but the major part of his life has been spent in Lancashire.

He was introduced to our church by the one who afterwards became his wife, and who delights in being able to subscribe herself a life long Primitive Methodist. It seemed but a trifling incident at the time when this young son of Scotia joined the little village Society then worshipping in a shabby unpretentious building on the banks of the River Irwell – but how momentous have been the results! We have now a beautiful church, with ample space at the back for school premises, free of debt. While many have laboured and contributed to the accomplishment of these very desirable results it is generally conceded that Mr. Smith and his family have played no insignificant part. Their personality is felt in every department of the church‘s life, church, school, choir, and congregation.

They exert an influence as beautiful as it is remarkable. Mr. Smith is an ideal official – a good man, peaceful in disposition and sincerely concerned for the spiritual prosperity of Zion. He naturally shrinks from publicity, and yet by force of circumstances he is ever compelled to be in the front. No detail is too insignificant to gain his attention, nothing haphazard finds a place in his programme; he is a man of shrewd judgment, and of keen foresight, who carefully prepares for all contingencies: generous in all his gifts, regular and constant in his attendance, staunch in his principles and a loyal servant in, the church of his choice. His home is always open to the preachers, and the Society of which he is steward was the first in the Circuit to honour in full its promise to the Centenary Fund.

John was born abt 1851 at Dalmore, Midlothian, Scotland, to parents Thomas and Alison. Thomas was a paper maker.

John died on 6 July 1923 at the Cottage Hospital, Ramsbottom, Lancashire.