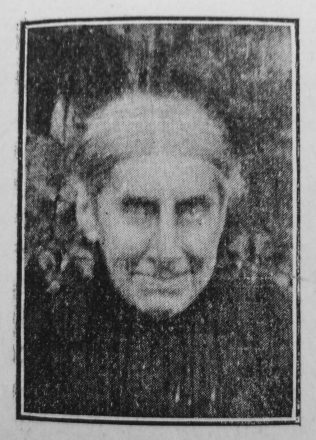 Transcription of Obituary in the Primitive Methodist Magazine by James W. Cotton

Among the unobtrusive but devoted souls who have proved a source of strength to village Methodism, a worthy place must be given to the late Mrs. William Stone of Langthorne near Bedale. She was a daughter of the well-known John and Isabella Hobson, (whose connection with Primitive Methodism dated from the time that the Rev. Joseph Spoor missioned Langthorne,) and a sister of the late Mr. William Hobson, who was for many years honourably connected with Primitive Methodism in the Bedale Circuit. Born at Langthorne March 27th, 1833, our sister was early taught to fear the Lord, and was brought up to attend the services in connection with the Established Church. Her conversion, however, in 1846, took place in a Primitive Methodist class-meeting.

In 1862 she became the wife of the late Mr. William Stone, a respected local preacher. She was whole-hearted in her attachment to the Church of her choice, was interested in all departments of its work and rejoiced abundantly when progress could be registered. For many years she was a diligent collector for the missionary cause, she and her sister-in-law, Mrs. William Hobson travelling miles in pursuance of this object. She was a generous supporter of the Church’s funds, and her home was always an open house to the preachers of the Connexion. For the last twenty years of her life she was a great sufferer, but she was never heard to murmur. She would often remark that she was being made perfect through suffering. In the midst of the pain attendant upon her last illness she was cheered by the thought of an approaching release, and frequently repeated the words:
“Oh, what a mighty change
Shall Jesu’s sufferers know.”

On the 12th of March, 1904, she was released from her sufferings. Her end was peaceful and serene. In a quiet and trustful spirit she passed away to be “with Christ which is far better.”

Her body was laid to rest in the Croakehall cemetery by the side of that of the late Mr. William Hobson, a largely attended service being previously conducted in the Langthorne Chapel by the Circuit Minister, the Rev. W. Skelson.

Rev. W. Bennion, in the course of a beautiful tribute to her memory says: “Her zeal for God’s house made her most anxious that no word or deed of hers should be a hindrance to the prosperity of the Church. She was such a sincere Christian and genuine friend that to know her thoroughly was to esteem her highly. Of her it can truly be said ‘She hath done what she could.’ ”

Rev. A.J. Bull, another former minister, writes: “Her piety was of the thoroughly settled and not the spasmodic type. She was cheerful even in the midst of great suffering. The servants of God always received a hearty welcome in her hospitable home. Primitive Methodism owes more than will ever be known in this world to such quiet, unobtrusive but Godly and devoted souls as the late Mrs. Stone.”

To these tributes the writer would like to add his own, for he has often found it to be a means of grace to breathe the atmosphere of her home. She was one of those souls that make one feel what a glorious reality religion is. Her beautiful humility seemed almost an alien thing in these times of ambition and self-seeking. How courageous she was too! The writer has known her many a time wend her way to the little sanctuary when every step she took was in pain. Thank heaven for such souls as Mrs. Stone! They not only infuse strength and inspiration into the minister but, quite unconsciously, they enrich and ennoble the Church in its entirety. If only the Church could produce more of them the attacks of scepticism would be repelled more effectually than by volumes of argument. It is cheering to know that Miss Stone is faithfully seeking to carry on her mother’s work, and that the memory of her mother’s life is a constant source of inspiration to her. May she be kept faithful till the morning of re-union.